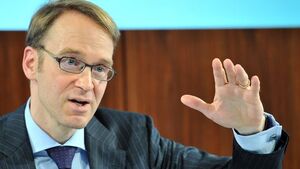 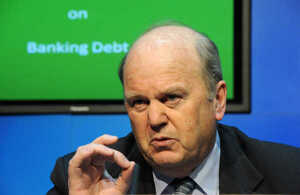 You may recall Finance Minister Michael Noonan (above) joking about the legality of last week’s promissory note deal.

Well, it seems there are some people, who aren’t laughing – namely the Bundesbank’s president Jens Weidmann (top) who feels the deal is dangerously close to illegal monetary financing.

“The Bundesbank is unhappy with what it sees as indiscreet statements by Irish politicians on the role played by various officials in reaching the agreement.
There is annoyance, too, that remarks in Ireland on the resulting cost savings only highlighted the legal questions surrounding the arrangement.
For his part, Mr Weidmann said that Irish remarks had “underscored the fiscal elements in this transaction”.
Article 123 of the EU treaty forbids the ECB from engaging in monetary financing. However many officials close to the deal have conceded that both the original promissory note deal and its successor arrangement did just that – or at least came very close.
Yesterday, Mr Weidmann reiterated his “strict” definition of monetary financing and urged EU leaders to “accept the limitations of article 123 for our actions”.
Mr Weidmann said he was not “passing a legal judgment on a particular transaction”, but said the liquidation of IBRC had “repercussions” which the ECB would have to ensure conformed to its rules.”