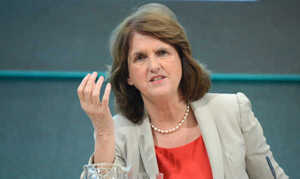 Minister for Social Protection Joan Burton made a play in a Dáil debate last week to start using the proceeds from the deal this year, saying there was “a limit beyond which additional austerity becomes counterproductive”. Such remarks were very poorly received in troika circles.

“This doesn’t go down at all well,” said a European source in Brussels familiar with the rescue programme. “It doesn’t send the right signal to the other member states.”

Although Minister for Transport Leo Varadkar took an opposing view to Ms Burton in the Dáil debate, Tánaiste Eamon Gilmore said on Friday the deal will bring “a tangible benefit for people” in the next budget.

Keeping schtum. It was all you had to do. But nooooo….

Good Luck With That