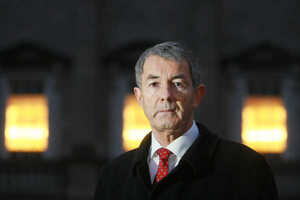 The issue involves prima facie evidence that at least one crime may have been committed by serving TD and former government minister, Michael Lowry…

…In a proper democracy, the police force and Revenue would investigate the contents of the Lowry Tapes with extreme urgency. Confidence in the criminal justice and tax systems would demand no less. If there is even a whiff of favour towards a member of parliament in a criminal justice matter, then democracy is undermined. And right now, in light of all that is going on, democracy is not in a healthy condition.

…There has been nothing from Enda Kenny to suggest that he takes the tapes issue seriously, or has consulted his Minister for Justice on the matter. Nothing from Alan Shatter to show that he takes his ministerial brief seriously. It would appear that Kenny et al are gambling that the public doesn’t appreciate the seriousness of what is at issue, and intend to keep their heads down until it blows over…

…The function of the media in a democracy has also been strained by the Lowry tapes. The Irish Examiner, Irish Times, Newstalk FM and TV3’s Vincent Browne Tonight have all covered the story in a manner befitting its seriousness. However, the national broadcaster has not.”

Michael Clifford in today’s Irish Examiner, about apparent inaction by gardaí, Revenue, the government and RTE over The Lowry Tapes.

Lowry and inaction of Gardaí/Revenue (By Michael Clifford, Irish Examiner)

Previously: So RTÉ, Which Is It?

RTÉ and the Lowry Tape

He Can Only Be Found In The Tipperary Star