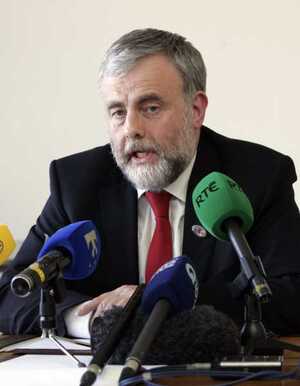 Economics correspondent of The Guardian, Phillip Inman, writes about the Croke Park II deal which was declared “dead” by SIPTU president Jack O’Connor, above, yesterday.

“A plan to slash €1bn (£860m) from the public service pay bill over three years has just been rejected by unions, plunging the Fine Gael/Labour government into crisis. The deal  was supposed to be sealed by July, but with further negotiations and ballots necessary to get the cuts plan back on track, and with union opposition hardening, the government may be forced to carry out a threatened 7% across-the-board cut in pay.”

“The €1bn in savings is part of the Irish government’s deal with Brussels and the IMF and must be implemented if the government is to comply with rules that govern how much it receives in bailout funds.”

“It was always going to be tough to persuade public sector workers to accept a pay cut when much of Irish society remains unreconstructed from the corrupt boom years and the bankers, property developers and professionals who benefited handsomely before 2008 appear to have gone unpunished.”

“For many public service workers the 7% cut is just the latest attack on their living standards. For some, it will add up to a 25% fall in incomes since 2008.”

“The so-called Croke Park II deal that broke down on Tuesday is more nuanced, but includes pay cuts for all as a central measure.”

“It is possible the Irish government will find a fudge that keeps the IMF and Brussels at bay. But it shows the tensions that remain inside the eurozone, which, with its austerity obsession intact, is likely to suffer many more convulsions.”

And How Are We Being Viewed By The World This Afternoon?