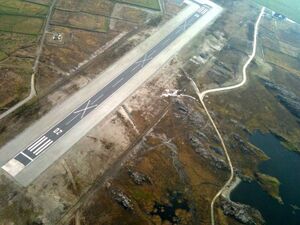 Nearly €9 million [of public money] has been spent on providing two airstrips in West Connemara – both of which are now overgrown with no possibility being opened in the near future. The airstrips at Cleggan and on Inishbofin [above] were built more than five years ago but then plans to provide an air link between the two locations hit a brick wall through lack of funding. The airstrips are currently falling into a dilapidated state.