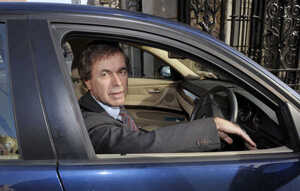 The Garda report filed on the 2008/9 incident in which Justice Minister Alan Shatter was stopped at a drink-drive checkpoint “has gone missing”.

A concerned and informed garda whistleblower has been found..

An informed source has revealed the garda who stopped Mr Shatter felt he was not fully co-operative. She was also asked by the then Fine Gael frontbench spokesman: “Don’t you know who I am?
Information made available to the Irish Independent about the incident about five years ago appears to contradict Mr Shatter’s version of events.

Informed sources familiar with the case say that the now Justice Minister:

* Said nothing about being asthmatic, preventing him completing the test.

* Intimated to the garda that it was unconstitutional to stop him as he was coming from the Dail and said: “Check your law book.”

* Appeared not to make a sufficient effort to complete the breath test.

* Drove off without being waved on by the officer.

‘Don’t you know who I am?’ What Shatter said to garda (Fionnan Sheahan / Ian Mallon, Irish Independent)

And we know what happens to people such as Clare Daly, in similar circumstances.

She winds up handcuffed by the side of the road, taken to a police station and put in a cell. When she gives a urine sample she’s released with the remark: “Come back when you’re sober.”

The details of her alleged “offence” are then leaked and end up in the media. The fact she subsequently passed the drink-driving test with flying colours is beside the point.

Two whistleblowers started this. They misinterpreted and got wrong significant details, but they did us a service in disclosing what’s going on. Four TDs sought to clean up what has become a very, very rotten system.

Clare Daly ended up in handcuffs. Interaction between the Garda Commissioner and the Minister for Justice led to the release of private information about Mick Wallace. Ming Flanagan was publicly skewered for his bad behaviour.

The names of the VIPs and celebrities on whose behalf senior gardai quashed penalty points remain unknown. That’s confidential.

Time to wake up and smell the bullshit (Gene Kerrigan, Sunday Independent)