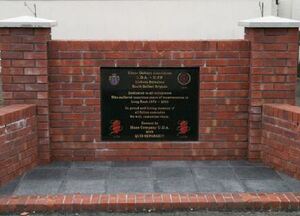 The RUC George Cross Widows Association has called for a halt to plans to build a peace and reconciliation centre at the site of the former Maze prison. They addressed their plea to Northern Ireland First Minister Peter Robinson.

Mr Robinson’s DUP colleague Jeffrey Donaldson, who is MP for the area, said he could guarantee that “there will be nothing in the new peace centre that will glorify terrorism”. “I put on the uniform of the Crown to fight against the IRA, I had members of my family circle murdered by the IRA,” Mr Donaldson told the programme. “I am not going to stand over anything that would glorify the actions of the IRA in any sense whatsoever.”

Meanwhile, 50 yards from the entrance to the former prison is a shrine (above) to UDA/UFF prisoners.