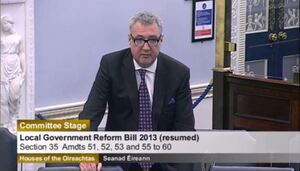 Speaking under parliamentary privilege today in the Seanad, Professor John Crown made further allegations against the board of St Vincent’s Hospital.

Professor John Crown: “The needs of those who require social inclusion, I think also includes those who have held challenges – and in this regard, I must just state in supporting the amendment that in September of 2002, a member of the administration of St. Vincent’s Private Hospital told me that the hospital had been billing VHI and other insurers in respect of drugs which had been provided to that institution for free, for research studies.
In the letter he stated that this was inadvertent and invited me to join with the hospital in making a joint approach to the insurers. Other documents which were provided to me had shown that this was untrue {gets interrupted} … that the billing was in fact..that the billing was deliberate and only ceased when the VHI found out. Incidentally, they found out from me.
The only defence the hospital could attempt was the absurd notion that {gets interrupted} they did not know that their research programme existed in their own hospital, despite dozens of staff being involved in reams of paper documenting its existence. When they were caught out, they next attempted to prove that the research programme was illegal {gets interrupted}. They spent tens, if not thousands of euro, public money (gets interrupted) in an attempt to criminalize a part of their own organisation. As a result of their action – the research programme was closed down for a year – women were denied access to a drug, Herceptin – which we now know was life-saving. {gets interrupted and asked to return to his seat} Though it was not the intention of the doctors, or those who attempted the cover-up {gets interrupted} – as an indirect result of their actions, women died. My hospital, its management and its board failed these women and should be forced to resign.”