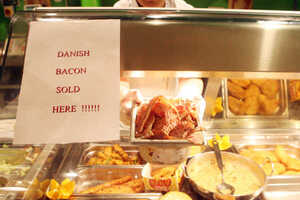 A survey has found that half the bacon and pork tested in butchers’ shops was imported. That is despite the fact most of the shops surveyed were signed up to a voluntary code committing them to sourcing their products locally. The Irish Farmers Association put 120 samples of back rashers, bacon joints, and pork chops from 11 butchers around the country through DNA testing to check origin.

Pat O’Flaherty, chairman of the IFA’s national pigs and pigmeat committee, said he was disappointed with the finding that 51% of the products were from abroad. “The level of imported product identified by the DNA testing is compounded by the fact that the country of origin was not displayed in any of the butchers’ stores audited,” said Mr O’Flaherty.

Half of butchers’ pork and bacon was imported (Caroline O’Doherty, Irish Examiner)