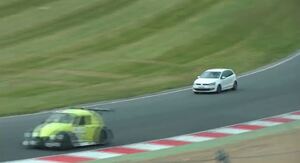 A man who allegedly drove his girlfriend’s car on to the former formula one circuit at Brands Hatch during a race was due to appear in court on Monday.

Jack Cottle, 21, was arrested after footage appeared on YouTube in June of a white Volkswagen Polo being driven into the middle of a Fun Cup race at the Kent circuit.

As the car enters the race track, she begins to scream, begging the driver to stop as he and a person sitting in the back holding the camera phone laugh.

A second video shows the car during the race.

13 thoughts on “The Track Of My Tears”