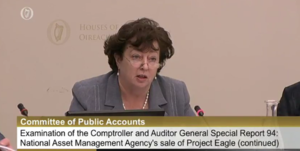 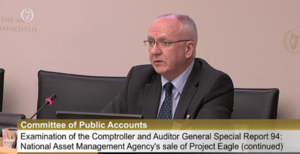 A report by the The Comptroller and Auditor General found the Northern Ireland loan book may have been undersold to the tune of hundreds of millions of Euro.

“Neither Frank Cushnahan nor any other external member of Nama’s Northern Ireland Advisory Committee had access to confidential Nama information that could have been passed to any bidder.”

From the PAC hearing:

Catherine Murphy: “Can I just go back to the point that was made, I just want to expand on it a little bit, and I am referencing the Northern Ireland Finance Committee, page 17, the review on the sale of NAMA properties in Northern Ireland and the paragraph that was referenced in the BBC Spotlight show, I’ll go on –

“Mr Brian Rowntree, stated that the NIAC members had access to information which was of a ‘commercially sensitive nature’ and which offered ‘commercial opportunity’ and would have been of some value to a bidder for Project Eagle. This is of particular significance as it appears to contradict the position adopted by NAMA to date”.

Brian Rowntree: “I wouldn’t have made that statement on Spotlight programme if I hadn’t been affirmed that I was in a room where I had discussions around commercially sensitive information. I wouldn’t have gone public by stating that on a BBC spotlight programme. This refers to a piece of work, an evidence based piece of work undertaken by a university who were doing land assembly analysis and before they’d even undertake or engage with NAMA they had whole stage of caveats around the confidentiality of the information and this was explained to the committee, now if that’s not commercially sensitive, i don’t know what is. This data not only had the location and types of property, this data also had details of planning permissions, current, and about to expire and potential for renewal. it also had details of housing and residential need overlaying on top of it,  it also had details in consolidated form of holdings by other banks. So one would have a got a picture of the complete land bank of Northern Ireland, and one one have looked at the opportunity locations within that portfolio.”

Catherine Murphy: “And would have some of those have been properties with loans in NAMA?”

Brian Rowntree: “Yes, I think from memory, NAMA would have accounted for 30%.”

Catherine Murphy: “And would that have been identified that they were properties with with a Nama loan?”

Brian Rowntree: “The information was provided to the university by NAMA, so it was shown as NAMA properties and there was a separate section of the report which was privileged to NAMA which showed the NAMA impact analysis across all those platforms

Catherine Murphy: “I want to refer to page 132 of the C&AG report, just at the end of it it says:

“With regard to the proposed acquisition of the NI Debtors Portfolio, PIMCO confirmed the following: They have not completed any due diligence or engaged directly with any NAMA debtors in this regard PIMCO’s analysis was conducted by way of reverse engineering NAMA’s Balance Sheet and cross-referencing the publicly available information on NAMA’s portfolio”

I am just curious, because its jumping out at me, could they  have put together that portfolio? is that credible? Is that believable that they could put together a portfolio by reverse engineering on the NAMA balance sheet and cross referencing other information or does it indicate there was other information?”

Catherine Murphy: “The approach appears to have come almost packaged to NAMA via the two Ministers for Finance (Michael Noonan and Sammy Wilson), it looks to me, if I am reading this right, that there was significant amount of information in advance of engagement with NAMA, in putting together this portfolio.”

Brian Rowntree: “Well purely from a commercial context, from my own past commercial experience I would certainly not have bid for something blind. I have never known anyone to bid for any business oppertunity blind. I don’t know what their evidence base was but that’s where we go back to the controls and corporate governance provisions, those would outline and underpin the evidence provisons that supported the bid process.”