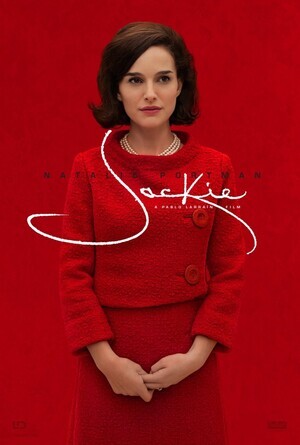 1. In another case of the coincidences that cinema is capable of, just as the USA stumbles through a political and social crisis that could well be its undoing, along comes this intense-looking drama recreating another of that country’s defining moments.

2. Following the assassination of her husband John F. Kennedy (Caspar Phillipson), Jacqueline Bouvier Kennedy (Natalie Portman) attempts to make sense of her own shattered life as American politics swirls around her. The story is framed by the famed “Camelot” interview Kennedy did with Life magazine’s Theodore H. White (Billy Crudup) following her husband’s funeral.

3. Far from being a cloying, formulaic historical drama, however, Jackie has been described as having “the sophisticated psychological aesthetic of a Jonathan Glazer movie”.

4. Speaking of Glazer, Jackie’s soundtrack has been composed by Mica Levi. Levi is responsible for the distressing score to Glazer’s equally distressing Under the Skin (2013). That should give one an idea of what to expect.

5. Prolific Chilean director Pablo Larraín is behind the camera. He has already released two films in 2016, (El Club and Neruda), and is making his English-language debut here.

6. Spielberg had his eye on the script originally, before it got in to the hands Darren Aronofsky (who directed Portman to her Oscar for Black Swan in 2010). Aronofsky eventually passed it on to Larraín and took up producer duties himself.

7. From the opening close-up, Natalie is obviously gunning for her second Oscar. She’s appeared in some awful tripe since Black Swan, but at the end of the day there’s nothing wrong with taking a few Marvel paychecks while waiting for the next big fish to come along. She  also wrote, directed and starred in Hebrew-language historical drama A Tale of Love and Darkness.

8. At first glance, Jackie may look like histrionic Hollywood Oscar-bait, but the arthouse credentials behind the camera and Larraín’s distinctive visual style suggest something much more interesting. No doubt Jackie will feature heavily come Awards season.