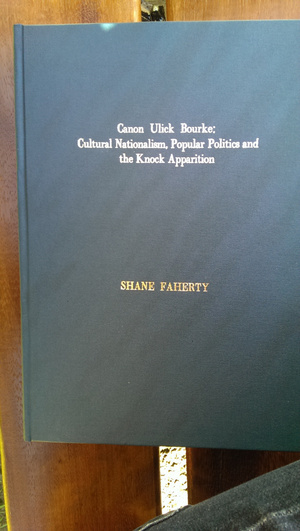 Shane Faherty, from academia/humanities blog Modern Distortions, discussing the disappointments of pursuing a Ph.D., the attitudes towards Ph.Ds in the post-austerity jobs market, and the inevitable trudge through call centres.

“When, at the age of 30, I started a Ph.D. in history in University College Cork I was pursuing a passion. Nobody does a Ph.D. in humanities for monetary gain, however, I did think that my employment prospects would be improved somewhat.

Little did I think that upon completion, four and a half years later, I would be facing into a year and a half of unemployment, underemployment and precarious employment where on two separate occasions I would find myself working in call centres.

The week I submitted my doctoral thesis in April 2015 my wife and I discovered we were expecting our first baby. The following week I was in the dole office. I didn’t expect to be there.

This should have been the most exciting time of my life. However, the multiplicity of feelings I was experiencing were underpinned by exhaustion and uncertainty. When I tried explaining why I was there tears welled up. The lady behind the counter told me to take my time. I told her I hoped this would only be temporary arrangement.

I applied for jobs. All sorts of jobs. I wasn’t expecting to get an academic position overnight but I thought I would get something that was halfway decent. I spent hours on some applications, days on others.

I didn’t even get an interview for any teaching or research positions but what was more surprising was my lack of success in applying for other work which I was more than capable of doing. It seemed the private sector weren’t falling over themselves to hire historians.

I got some occasional hours invigilating exams and doing instructional design work in UCC but nothing that lasted more than a few weeks. I graduated at the end of October, my family came down and it was a nice day, but underlying everything was a sense of anxiety. I still didn’t know how we were going to manage.

With our baby due in December I needed any kind of work fast. I applied for a temporary customer service role with Amazon in their Cork contact centre. This centre serves the UK marketplace. Seasonal work in Amazon is sort of an institution for a certain demographic in Cork.

My team were a mixed bunch and mostly overqualified. There was one other person with a doctorate but also a medical doctor, a computer programmer, a poet, a musician, a sports therapist and a variety of other people who really shouldn’t have been there.

They were a good bunch. Science fiction was openly discussed and critiques of consumerism were part of the daily routine…”

63 thoughts on “The Precariat”