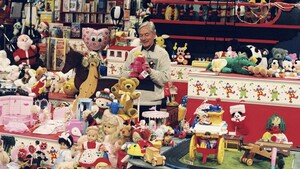 back in the day when we gathered to watch the Toy Show we understood that it was about stuff that American kids got. .

I have never praised TV3. Or even found anything on it worth bringing to anyone’s attention unless it was mean. But it must be said; I love the Irish GoggleBox.

Admittedly I hate it when a format from over there is localised and saved-as with Ireland after it. Come Dine With Me …. First Dates …. The Voice…. UTV. Besides, ‘the box’ instead of telly is a very English thing, so for the rest of this week’s Frill-Bit, Selfie-Telly-dot-ie is what it is.

I love it, I love them all, well, maybe when the two pets in Portobello with their blankies and blingy crystal for the Chardonnay cuts in, it’s time for me to run upstairs or let the dog out. But really I love them all, and funnily feel if Anita or one of the Twins or any one ov’em to be fair, got hurt I’d feel their anguish, like sympathy pains.

What an absolute gentleman Mr Adenuga is and what about the “you’re very jaysus bold” puss cat in Dolphins Barn?

Don’t I always say there is no such thing as an ordinary Paddy? Proof there now lads, and on your own telly too. So, fair play to TV3, the casting and cutting is top notch, you are frilly forgiven from all your Xposé sins.

I’m bringing this up now because tonight we are all on that same couch watching the same telly. Tonight Selfie-Telly-dot-ie has its annual congress.

A few years ago, John Blake Creedon recalled for sum’ting that back in day when we gathered to watch the Toy Show we already understood that it was about stuff that American kids got; in a way he’s not wrong, we absolutely understood that nothing daycent on that Toy Show was going to be at the end of the bed Christmas morning; we’d get the annuals. Big ticket stuff like Simon Says and Atari came our way about 3 years after Gay did his ‘merciful’hour moment.

In Cork, some of us had  an advantage ‘cause there was the potential for someone coming home from England to bring one over for us the following summer. That’s how I got my Sony Walkman, and my digital watch.

By doing a Reeling in the Years look back now, there is always a laugh to be had at the lad in his Christmas clothes and his showband hair-do playing showband keyboards. But to all of us, that lad in the massive velvet dickie bow and the Billy Barry kids were superstars. The teen idols of their day. I bet ya they were famous for years.

I don’t know exactly when the Toy Show changed from a looking glass into everything we weren’t good enough for to a real preview of if you want it you could have it. I suspect it was a combination of two things; Internet and Money slash Credit, so I’m going t’say late 90s; and followed by the Christmas Jumper which was definitely 03 04’ish and we bringing them back from New York.

There is no denying that the Late Late show couch has gone from bland to shit, and it started on Kenny’s shift. Gay got Mother Teresa, Ali, Billy Connolly, that Pee Flynn one, Annie Murphy and Peter Ustinov and whatever yere having yourselves; on the other hand, Tubs gets too much money but has the chore of trying to make the likes of Daithi O’Se and Nick Munier appear like global jet packers sweating to try and squeeze in the Late Late and do a favour for their old friend.

Also, Tubs is much better engaging with kids, his spoofing and messing with them have make it a much more engaging and unique show, for me anyway.

Incidentally the best segments in this current genre, for me anyway, is the one when Ted Sheeran arrived in, and that wee ninja killer ‘waun thur’ with the wee accent.

And it’s not just Tubs, the Toy Show production quality has improved, that could be tech too, but the numbers are bigger, brasher, better costumes, and they’ll have accents arriving in from all over Ireland tonight.

There is even a guarantee there’ll be a lad on a tractor; and all feeling completely at home. Gay and Kenny never managed that.

One thing that has never changed in the 40 odd’ish years is its place in the season, in our houses, in our working week and in our weekend planning.It’s an institution; like the All Ireland final. Like red sauce on chips. Like the Family Circle tin.

Tonight, is the Toy Show. Tonight, we are all cast members of Selfie-Telly, like the Pauls in Youghal, Dessie and the girls, the Adenugas in Navan, the Liberty girls and the Cabra girls, and fuck’it everyone else. It doesn’t matter what your front room is like, what age you are, what you sound like. Only that you’re in for the Toy Show.

There’ll be an Urbi et Orbi for ye; if yere wondering like.

Charities Are Cash Registers Without The Till Receipts

20 thoughts on “Why I’m Staying In Tonight”