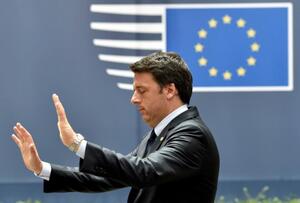 A bad weekend for Europhiles?

I know it is a hackneyed old phrase and gets trotted out in almost every election discussion, but there is a very good reason Tip O’Neill’s “all politics is local” maxim gets so much airplay: it’s because it’s true.

Yet, somehow, commentators, pundits and even politicians forget this.

Take yesterday’s referendum result in Italy. No sooner had the exit polls showing a heavy defeat been announced but the Euro-sceptics, including Nigel Farage, were out in force to claim the result as a continuation of the Brexit/Trump trend.

Isn’t it curious how those styling themselves the biggest supporters of national sovereignty and the greatest opponents of EU integration are the ones who see every political development in terms of a pan European trend and not individual nation decisions? Mightn’t the factors underpinning the Italian result have more to do with local Italian politics than what is happening in the UK or France?

As it turns out, they do. While the lazy analysis will see it as just another phase of the Brexit/Trump populist train, the reality is that the Italian result was not about populism versus the establishment.

There were as almost many members of the establishment on the No side as on the Yes, including the centrist former Italian prime minister and EU Commissioner, Mario Monti, hardly your archetypal populist!

Though the winning No side also included the anti-establishment Five Star movement, they were not the insurgents – the No side were arguing the status quo. They were urging a rejection of Renzi’s proposals to make Italian decision making easier by reducing the size and power of the Senate and taking power back to the centre from the regions.

While the Italian result was widely predicted, including by pollsters, the Austrian Presidential result was not.

Right up to the last minute the polls in Austria were forecasting a very tight race with many pundits concluding that the far right’s candidate, Norbert Hofer, would emerge the winner. In the end, the moderate Van der Bellen had a comfortable win.

Not only does his victory deal the simplistic “populist wave” argument a blow, it also reduces the size of the headache facing Brussels today.

But before they start the celebrations in the Berlaymont, the far right FPO party is still on course to make significant gains in the 2018 Austrian parliamentary elections – though these are the same polls that called the presidential for the FPO, so maybe take that with a pinch of salt.

Before we reach the 2018 Austrian elections, we have 2017 to get through – and 2017 brings a series of crucially important general elections; in the Netherlands, France and Germany. The timeline is as follows:

March 15 – general election in The Netherlands

Sept/Oct – German federal elections, polling date yet to be determined

And, remember, just after the Dutch elections and before Round I of the French presidential election we will likely have the UK’s triggering of Article 50, commencing formal Brexit negotiations.

Next year will be an important one for Europe, though I suspect those seeing it as the year that Europe starts to finally and irrevocably fall apart may not get their wish.

As with yesterday’s results, the outcomes will likely be a mixed bag of confusing signals. While it still looks unlikely – at least from this remove – that the far right or ultra-nationalists will end up in office in either France or Germany, the possibility of Geert Wilders PVV party ending up in coalition government in the Netherlands cannot be ruled out.

Meanwhile, what lessons will Brussels take from yesterday’s Italian and Austrian results?

Not only was the Italian result the clearer and more decisive of the two, it is the one that will likely have the most immediate impact in Brussels. Italy’s financial sector was in a precarious enough position before the referendum, so the result coupled with the instability that will follow Renzi’s resignation can only make an already bad situation worse.

As for the Austrian result, if it had gone the other way and the far right had won, then much of the focus that is now on Italy would have been on the far right’s victory and the alarm bells that it was setting off in Brussels. The response in Brussels will be a sigh of relief that they just have Italy to deal with and it is hard not to imagine that they had already factored the Italian defeat into the mix.

So, the Brussels response will likely be: as you were. This will also be the probable Brussels response to any emerging crisis over the coming year. The EU is set to effectively go into stasis or suspended animation until after the German elections next, with the Commission President Juncker appearing to have already personally commenced the process.

This should not be a period of inactivity here. The triggering of Article 50 negotiations in March 2017 should kick start a debate on this island as to how we see our EU membership and which way we want to see the EU go.

A good starting point for such a debate could be found in comments made by Scottish First Minister Nicola Sturgeon during her address to Seanad Éireann and in some of the responses from our own Senators. The First Minister spoke of:

This theme was picked up on by several Senators, including Fianna Fáil’s Mark Daly and independent Alice-May Higgins with Michael McDowell reflecting opinion across the Chamber saying that

He is right and it should inform our approach to the Brexit talks and what we want a post Brexit EU to look like, after all: all politics is local.

9 thoughts on “The EU Is Not Over Yet”