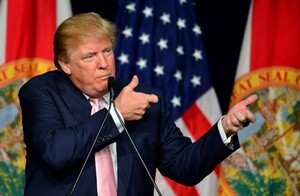 We may yet sink deeper into this anti-intellectual morass. We may linger longer than we expect, and most certainly need to. But flames need to be kept lit.

“I’m, like, very smart,” The Donald has stated to criticisms that he has chosen not to take briefings from the US intelligence services.

To be dubious of what such briefings might contain, should be a character point in his favour. After all dissembling is a raison d’etre for such ‘intelligence’ agencies. However to forgo any such briefing, because you already know what you believe you need to know, truly is ignorance writ large.

“A wise man is someone who knows what he doesn’t know,” that is a saying attributed to the Chinese philosopher Lao Tzu. It seems, in its apposite meaning, to perfectly not encapsulate The Donald. His total lack of self awareness has been seen by enough of those who support him, as reason to have him become their pin up boy. His certainty being seen by his defenders as confidence. His confidence being seen as strength.

In this he has become emblematic of the post modern world. This world of the simple truth. A world without nuance. A world where complexity is an inconvenience to be ignored.

Instinct, not influenced by the organised thoughts of others, but developed through bias and prejudice, is the sad standard bearer of truth in these ever deluded times.

The simple truth is confirmed by surrounding yourself with those who share your worldview. To question is to invite derision amplified through abuse. It is the behaviour of an ever indulged child whose faux confidence should be more properly recognised as bullying.

This is the world where we have had enough of experts. Where scientists are the conveyors of hoaxes. Where shouting louder makes you more ‘right’ than anyone else.

Those emboldened by this celebration of ignorance now hold sway throughout the ether, on the airwaves, and in our collective consciousness. Those of us who choose to think differently (or indeed to think at all) could decide to remove ourselves from this madness. Instead we should listen. We should try to engage.

We may yet sink deeper into this anti-intellectual morass. We may linger longer than we expect, and most certainly need to, in this thoughtless swamp. But flames need to be kept lit.

Liberal complacency has certainly contributed to this ongoing political coup against logic. Liberal surrender would make its victory complete. Think on that while we are still able to think.

The further or deeper The Age of Donald persists, the more antagonistic the treatment will be towards thinkers/questioners. In the US the preferred form of abuse by the rabid right is a slight on the mental capacity (but more insulting on those with special needs) of those who won’t rejoice at this new golden age. This abuse should become a badge of pride.

The slogan towards enlightenment should be ‘Libtards of the World Unite’.