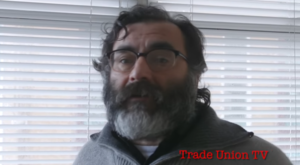 Working and paying his way up to two months ago, he was forced from his home by the escalation of rents in Dublin city, and managed to find a place in Apollo House before the clampdown on new entrants.

A non-drinker and drug-user, he’s found the House to be a safe and usable living space that’s far from the rundown space its landlords and their backers are claiming it to be.