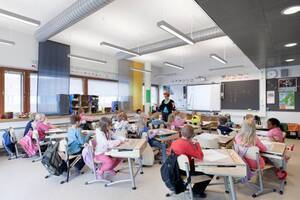 Are we ready to emulate Finland’s education system which promotes potential and the love of learning ahead of the ability to regurgitate facts?

Last week a story emerged that didn’t seem to get a lot of traction. Its source, being a report from the National Council for Curriculum and Assessment, probably has had a lot to do with that.

The report suggested that the Irish primary school curriculum should be radically altered along Finnish lines. The Finnish education system currently being seen as the système du jour.

Child centred, based on bringing out the learning from within rather having it imposed upon, there is much in the Finnish system worthy of consideration and emulation.

This, however, is only a report. It requires one of the most conservative departments of government, that of Education and Skills, to bring its proposals into being.

I would be sceptical it would do so, or at least not do so while cherry picking those aspects that would result in cost savings, whilst ignoring those proposals that could achieve better social and educational outcomes.

Add to this a lack of willingness to interfere with things as they are, lest the new world order of bluff and blunder over consideration, takes offence, which makes change even less likely.

But we owe it our children to be part of an education system that puts realising their potential ahead of regurgitation; which can instill a love of learning ahead of being made into an economic utility.

By way of example I’d like to impart this personal anecdote. I get to help out with the daughter’s daughter. It isn’t an imposition, her joy of life is infectious. I sometimes get to collect her from playschool. From there, and until the time I get to return her to the real world, I occasionally get to take her to a local playground.

Initially I had to overcome strong qualms I had on how, sadly, our society views men being on their own with young children, regardless of the family relationship. I got over that.

The daughter’s daughter disabused me of such notions. Being the livewire she is she demanded constant attention. The exercise I was getting flitting from side of the playground to the other was exhausting, but aerobically beneficial.

She seemed magnetically drawn to climbing; on the steepest interface to the highest point. I stood nearby to act in case my Icarus ever came to grief, which she never did.

On one piece of apparatus I was more cautious than I should have been. It was about 50cm off the ground. On its top were a number of pods similarly distant from each other, on alternate sides requiring a step or a slight leap to reach.

I feared if missed a nasty graze or a twisted ankle might be the prize. I went to hold her hand to offer guidance. She refused my hand with disdain (I’m quite use to female rejection). Putting her hands on her hips she proceeded to tell me “I want to learn it myself,“.

If I ever needed confirmation that we need to go Finnish in how we educate our kids as they educate us, madam provided it for me there in splendid, suspended animation.

10 thoughts on “Out Of The Minds Of Babes”