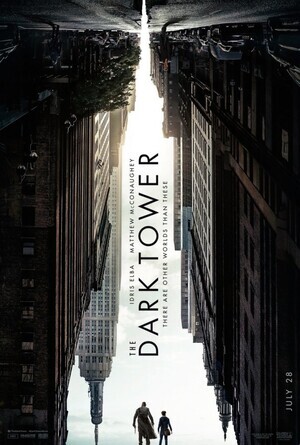 1. A few months ago I said to look out for lots more shared universes on the big screen. While you wouldn’t quite call the collected works of Stephen King a shared universe, he is certainly being tapped heavily at the moment as filmmakers look for ever-more ways to get bums on seats.

2, With that, here comes The Dark Tower, an adaptation of King’s epic eight-book cycle (1982 – 2012); part The Lord of the Rings, part The Good the Bad and the Ugly (1966). The film has been in various stages of development over the past ten years; J.J. Abrams was attached to direct at one point (when is he not?), before Ron Howard came close with a hugely ambitious alternating film-TV-series-film project covering each book. Howard remains as producer, with Danish director and co-writer Nikolaj Arcel in the chair now.

3. Condensing is understandable given the sprawling nature of the source material, but this looks to be a very, very, condensed. Proceedings look to have skipped most of the first two books and eliminated several earth-bound characters that otherworldly “gunslinger” Roland Deschain (Idris Elba) encounters on his travels.

4. Fact fans: King’s original inspiration for the story was the 1855 poem Childe Roland to the Dark Tower Came, by Robert Browning.

5. A companion TV series covering other segments of the book series is planned for 2018, according to Entertainment Weekly.

6. There was confusion in the air when Matthew McConaughey was first cast; rumours flew that he was to be cast as Randall Flagg, the villain in a new adaption of King’s apocalyptic masterpiece The Stand. Flagg in that book and The Man in Black here are implied in the text to be the same character (along with several other King novels). Sadly, The Stand – in development as a trilogy by Ben Affleck before he torpedoed his own career by taking the Batman gig – has once again been shelved. Which is a shame because McConaughey is perfect for that role. Maybe that shared universe would work after all.

7. And speaking of shared universes, let’s play a game of Good Idea/Bad Idea. As well as The Dark Tower, It, and any one of a number of his novels currently in “development hell”, Castle Rock was announced quite quietly some months back. It’s a drama series apparently blending characters, stories and situations from several of the author’s best-known works. J.J. Abrams is involved. When is he not? Anyway, Gotham was relatively successful at something similar, and as we keep seeing, everyone wants a piece of that shared universe dollar. It’s a good dollar.

8. The Dark Tower looks very, very different from what one might have expected from the books, where there’s a gloomy, sorrowful atmosphere to proceedings. Mid-World (King’s fantasy Wild West) is shrouded in a dream-like atmosphere, while the visits to Earth were originally set in the 1960s and 70s, taking time to explore the social issues of those eras. Eliminating those situations and characters, and putting the focus on to 11-year-old Jake Chambers (Tom Taylor) really makes this look like just another teen dystopian adventure, the kind Hollywood has been churning out non-stop over the past few years.