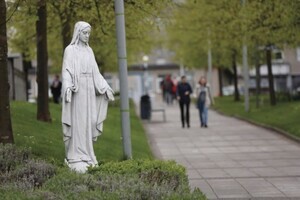 The construct of religious control and management of social services in Ireland was a British one. After Catholic Emancipation, church authorities were happy and willing to be the administrative arm of the British government, in seeking to provide key social services.

The model fit well with the dominant political philosophy of the time, that charitable and voluntary provision helped to minimise State involvement.

With the arrival of the new aristocracy of the Irish Free State, seeking to develop a new State on scant resources, there was instant acceptance to continue this arrangement.

For the church authorities, the tools of care and welfare soon began to be recognised by them as useful means of social control. Against that education and health care was being provided that otherwise would not have been.

The State, since 1922, doesn’t seem to have been in any hurry to secularise our social services. A demonised Church sometimes has been a useful means of deflecting blame from the political system.

An example of this would the Mother and Child controversy of 1951, where the role of Archbishop John McQuaid (an undoubted charlatan) was exaggerated to obscure the real villains of the piece, the Irish Medical Association with its campaign designed to protect the private practices of its members.

There is a bill that has to be paid for the use, management, and provision of facilities/services, from the State to these religious groupings for the period since 1922. Set against this should be the ownership of any building or facility built solely with use of taxpayers’ money.

This won’t be straightforward, as many of these facilities have been developed with resources other than State funding. Any settlement will also have to take this into account.

Redress is something that we’ve gone a long way towards addressing, even if a considerable journey still remains. The ultimate responsibility for abuse remains with the perpetrators. Religious organisations who shielded the abusers need penalising, with the full implementation of such penalties.

However in terms of the costs of redress, the State continues to bear a huge responsibility, as it has been the State that created the risk for abuse victims, through farming out their care to third parties.

To secularise our social services requires a lead in time. Management of schools and hospitals will have to be changed. For the sake of continuity the State should be appoint some religious representatives to these management structures, to make use of their acquired experience.

The sum to achieve full secularisation is not just weighing unpaid redress against the cost of new facilities. Religious groups, who have provided social services since before the inception of the State, should be paid for having done so.

Is that a price we are willing to pay?

The Plan’s The Thing

56 thoughts on “Church And State”