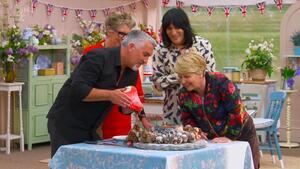 The Great British Bake Off on Channel 4 last night

The Great British Bake Off made its debut on Channel 4 last night.

I suspect a lot of the moanie minnies and professional grumps are very quiet this morning. Season 8 Round 1 was very hard to criticise. And Hollywood was pure Hollywood so even the BBC loyalists and Channel 4 boycotters can now go camp somewhere else.

To give you a local example of those just looking to find fault with Channel 4’s ambition, here’s what the Irish Independent had to say about their opening Trailer 4 weeks ago. Judge it for yourselves, is it creepy?

FFS, if there is ever an example of the Indo following a preference or displaying a deliberate partiality needed – take that link with ya.

BTW that’s why the Irish Bake Off hasn’t managed to trap its own market, unlike the Irish GoggleBox which is a pure winner.

If I had one moan about last night, it’s that we didn’t get to see enough of the bakers engaging with Sandi & Noel, but that was an issue with the previous hosts too. It’s the format.

As the Bakers go home those remaining get more space for themselves and their Bakes.
Actually, I’ll be more explicit about this. The C4 format is identical to the BBC one, even the Opening Titles.

A few Frilly observations to put out there with ye;

The ads didn’t interfere too much with the show. In fact we laughed when the final ad break came at the Star Baker/ who’s going home moment. They also provided the opportunity to raid the bikkie tin and treat jars, or in my case give out when I discovered the Jaffa Cakes were gone and not miss any part of the show.

They also allocated (well in this house anyway) the time for all the couch commentary to be done with before it came back on.

I suspect Prue will be nicer and sweeter to the Bakers than Mary Berry, who let’s be honest could get school-teacher cross when a baker didn’t take her advice from a previous bake.

Anyone remember the Season 1 final and her lifting Ruth (The Pink Whisk) out’ve it about the size of her scones? Christ she nearly clattered her, and it cost Ruth Clemens the win (Incidentally she remains one of my favourite bakers.)

Noel Fielding was an inspired casting, as I knew he would be, but until last night I never noticed how elegantly poised he is. While I’m a sucker for the tall and lean, and I’ll give ye a heads up again of possible wanton prejudice; wasn’t he lovely tho.

I now wish they had moved to Channel 4 last year so I could see how Noel would have got on with Selasi; I’d say it would have had the makings of a spin off.

No disputes or doubts about last nights Star Baker, likewise with the lad going home.
Although yer man make a right mickie of it, I kinda like the idea of a Crumb Cake with Rhubarb (instead of my usual coffee and a bitta cardamom.) I’ll let ye know if I progress it.

Anyway; in the words of Columbo, one last thing;

It will be the Year of the Scouse, definitely. But which one?