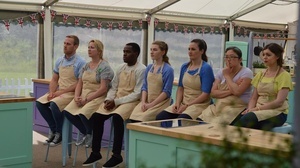 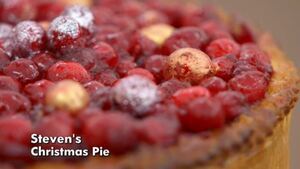 As ye know me and Choux don’t get on, and usually I am always willing to work things out if I have a falling out, so there I was – all set up with me copy book n’all, but no Choux show up. We’ll just have to stay apart I suppose.

Pastry was the week but pies pies, foreign tarts and pies. And not a soggy bottoms between them.

Sur we all love a pie, and they can be big and tall, short and small, sweet, savoury, hot, cold, for brekkie, lunch, dinner and your afters, as well as everything else in between.

They can be seasonal, celebratory, or plain and simple. They can come in all shapes and sizes, even colours; so there is one for everyone. Even the vegans, the fussy eater and the celiac.

So, what’s not to love, learn and even experiment with a Pie.

I’m not going to arse ye around about shortcrust; everyone has a version, everyone has a different method; and I promise ye, every outcome will be different. So don’t bother getting too involved in the theory and the research; just buy it!

And use it to make Pies (remember to avoid the sweet dessert one for savoury fillings tho – use yere cop on a bit).  Jam. Stewed Apples, Cheese’ ham. Whatever is coming up to their sell by date.

Throw it into a pie. Even if is only meh; there’s always the toppings to come to the rescue; from beans to custard. There is no excuse for not ever trying to make a pie.

The most regular savoury pie in this kitchen is chicken but it’s a topped-off only pie; and its filo. Maybe one day I’ll get around to doing it for ye as it’s a great use of leftover chicken and the only thing you might not have to hand is the filo.

On that particular pastry; even Mary Berry buys in. So when ye see it next in the Supermarket pick it up and keep it in the freezer ‘till I get around to Chicken Frilly Pie. Whether it’s here or wherever. Or whenever. (Incidentally I also buy in me Puff – so there.)

Both the signature and showstopper last night were about covered savoury pies. Now I’ll admit to never trying Hot Water Pastry in a stand-up pie before but I’ll be trying it; although probably not any of the recipes last night.

However, let me talk about two of them for a bit because I like the ideas; Kate’s Curried Spud got the Hollywood like; and it looked great, she was even done before the last 60 second sweating last night. I’d be more inclined to take the different elements meself, like the filling on its own with samosa and fruity chutney most likely.

There was just too much spuddy starchy wadding filling about it for me for it to be mouth-watering; maybe it’s the scale of it in the high hand raised pie that I’m struggling with. Try it in smaller hand-held pies maybe? It’s worth a sticky anyway.

The other pie was also from the Showstopper; Steven’s Christmas Left-Overs one. What a great idea. And you don’t even have to do it on Stephen’s Day either. I would refresh the veg mind – or maybe use the left over stuffing and cranberry; but NO NO NO chance for the sprout.

You might get away with using left over gravy too, like I use the gravy for my Turkey Curry; which is one’a my own party pieces btw. Sur’ I’ll add that to the list of promised shares; Turkey Lurky Curry.

Even though it was less pastry and more pie last night, I enjoyed the show. And we had a first, what Social Media is now reporting as the Prue Pat, I’m calling the Christy Ring cup division of the Hollywood Handshake.

And wtf Yan. Nerd Pies and the equation for the perfect pie! Ara’ cop on a bit. The 13 year old here, who couldn’t tell ya where the dust-pan is kept, had one word for the fancy science and lab equipment; Ratios.

The result of this equation according to The Hollywood was “a mess” to which the 13 year old shouted at the telly “tell Paul you forgot to carry the 1!”

Best laugh of the night. Leaky cracks didn’t stand a chance after the signature. Not even Noel’s cardi.

And then there was Sandi’s crying at having to send Julia home, ah sur I nearly cried meself.

That Stacy should have gone after the state of that Showstopper; and she even left the grease-proof in it for them to make it even easier. Listen tho’ we haven’t heard the last from Julia; I predict a bread book.

I’m not sure about Liam as Star-Baker – I thought Sophie was in there; but curried goat must be a first in the tent and he is brave; which you can only admire.

As I said last week, it’s still all to play for although I think Yan or Stacy will be next to go.

Any thoughts on Italian week? I’m a bit iffy meself. I’m not one for Ricotta Cheese fillings and Canolli stuff; but if this year’s Bake Off has done anything, it has reminded us that there is always something worth trying out yourself. I expect there to be a Panettone to learn about anyway.

News on last years Nigella Christmas cake; it’s as lush and boozy as it would have been last December. But I’m still reluctant to recommend and it’s an expensive bake.

Charities Are Cash Registers Without The Till Receipts