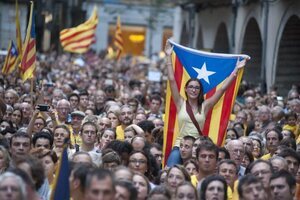 The brutal response of the Spanish Government to the Catalan referendum, like that of the British to the Irish rising of 1916, is likely to help confirm a critical mass in favour of independence, where none may previously have existed.

A similar exercise is about to take place in Kurdish Iraq. It is being condemned in advance by those who consider themselves to be ‘elite’ nations, who see what seems a natural expression of nationhood, as a likely destablising factor in the region.

Each and all of these factors have been cited as justifying new nations asserting themselves, even when dominance of belief or language are often the most destabilising of factors.

One of the decisions I was not happy with, while the Greens were in government, was the decision (at the behest of Germany) to recognise, so quickly, the independence of Kosovo.

There were many other options that could have been and should have been considered at the time. Kosovo could have become an international protectorate. The role of Albania (Kosovars being ethnic Albanians) should also have been explored further.

Establishing new nations, particularly the defining of citizenship, has been a fraught process in several countries.

Lativia and Estonia are countries whose independence, in its current form, has existed for little more than twenty five years. Both countries continue to struggle with large Russian minorities within their boundaries. Their second class citizenship, and laws passed against the Russian language, may yet provide a pretext for Russia to invade the Baltics.

Nation building isn’t simple nor is it easy. The 1960s film ‘What’s Up Tiger Lily‘, (a Japanese film dubbed into English with dialogue by Woody Allen) pointed to a more interesting approach. In the movie a character introduces himself as the representative of “a non existent but likely sounding country” who were next on the list for a place on the map, once an opening became available!

On Catalonia I find myself in agreement with the Sinn Féin representatives there, while also being somewhat jealous of their being able to witness history first hand.

Where we probably would diverge, is how we would view the ironic context of people who live in a north eastern territory of a wider national concept.

It would never happen here, of course.

24 thoughts on “The Notion of Nation”