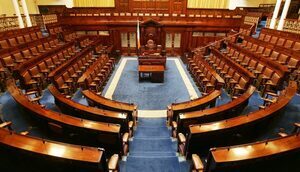 Though the big political event today is the Budget, I do not intend to devote too much time to it here.

So much of what is to be announced has already been trailed out that the members of the most ancient and noble orders of the economic and political commentariat could have filed their copy late on Sunday night, taken most of today off and left it to the theatre and TV critics to cover proceedings.

Not that the drama and theatrics of Budget Day are unwelcome or unappealing, but in today’s world setting the government’s budget is more a process than an event.

Much of what the Minister will do today is to confirm which political and business journalists have the most informed sources. The rest is him setting out the conclusions that have almost been reached on the income and expenditure side.

I say “almost” as today’s speech is not the quite the final, final word on the Budget. That comes with the publication, in a week or two, of the full details in the legislation, the Finance Bill 2017, that underpins the Budget. It, to quote previous Finance Bills, will:

“…provide for the imposition, repeal, remission, alteration and regulation of taxation, of stamp duties and of duties relating to excise and otherwise to make further provision in connection with finance including the regulation of customs.”

There may be a bit of “will (s)he, won’t (s)he” during the day as speculation mounts around the corridors of Leinster House about how this TD or that Minister of State is wrestling with their conscience on how they will vote for some cut or increase.

Though it is unlikely that we will hear a “man overboard” cry on any Financial Resolution votes due later tonight, even the best-laid plans of mice and men often go awry.

Theresa May knows the truth of that line only too well… and I am not referring to her nightmare of a conference speech last week. On April 18 last Mrs May thought she had the British Labour party on the ropes when she called a snap election to be held on June 8.

She was convinced that she had the numbers. All the Tory pollsters were telling her that. Indeed, so too were almost all the national TV and newspaper polls and even a few leaked Labour Party ones. Virtually everyone was telling her that she was set to win a landslide which could see her increase her working majority from 17, right up to maybe even 140.

But, as we now know they were wrong, badly wrong.

So was I. A few days before the June 8th vote I ran a poll on Twitter asking people how they thought the election would go. The numbers were interesting and ran against the still prevailing view that May was set to win big.

It was, but in a far more important and significant way than we realised at the time.

A major piece of research conducted by four noted US and UK election experts has shown that not only was the youth vote vital to the Corbyn surge, so too was the way in which this new cohort of young and first-time voters informed themselves.

The research, which was conducted for a book the four academics plan to publish soon, entitled: Youthquake! Brexit, the 2017 British General Election and Beyond, found that:

A flood of young voters, many of whom had relatively low levels of political knowledge, used the internet to get news about the general election.

In other words, the 2017 UK general election saw the internet, particularly social media, finally having a big impact on how individual people voted and the overall outcome.

The impact was twofold. Young voters were not only mobilised to turn out and vote (turnout among 18-29 y/o went up by about 19% compared to the 2015 election), they were also persuaded as to whom they should support.

So, their decision to vote and the choices they made were associated with the volume of election news that they consumed online.

While it can be argued that there were very specific conditions in the febrile and uncertain political atmosphere in the UK in the aftermath of the Brexit referendum vote that may have compelled many young people to vote, it does fit in with what some believe may be “a global generational shift of voting and political engagement”.

It is a potential shift that sees a cohort of new voters who do not perceive government as something to be whittled away until it is as small as possible, but rather as their best protector against the perils not only of globalisation and automation, but of affordable housing, education and healthcare.

Is this something we might see here? I suspect it is.

But politicians and pundits be warned. While these new voters may get their news online that does not mean they are a ready and available support base for any twitter-savvy politician who knows how to produce great selfies. Content matters, even online.

Bear this in mind when Ministers and TDs take to Facebook, Twitter, Instagram, Youtube and SnapChat tonight with memes, photos and video clips to reassure generation rent that all may yet be well in Fine Gael’s republic of opportunity – provided you get up in time.

8 thoughts on “Budgeting On The Younger Voter”