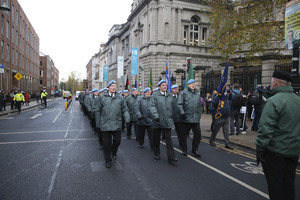 Tempting though it is to add my 2 cents worth to the vast swathes of analysis of what happened, or almost happened, on Brexit yesterday, I will resist. There is still just over a week to go to the crucial December EU Council summit and I am sure that we will see a lot more manoeuvring before then.

In the meantime, best to follow RTÉ’s excellent Brussels correspondent Tony Connolly and Politico.co.uk’s Ian Dunt for up to minute analysis of the Brussels and Westminster machinations.

Instead of looking at Brexit, I want to look back at last week’s 24 hour protest outside Leinster House by the wives and partners of members of our Defence Forces and offer two additional perspectives, which may help illustrate why the Defence Forces are a special case and worthy of a far higher priority than this government is according them.

Before I get to those, it is worth noting why the protest was by the wives and partners. Under Defence Force regulations serving members of the Defence Forces may not make representations regarding any aspect of their employment, including pay and conditions, to third parties, including elected representatives.

Though this may seem a bit draconian, it does reflect the particular nature of their job. Soldiers cannot simply down tools, especially when those tools are often loaded, and go on strike – particularly when they are one of the key services we depend upon in emergency situations. But there is, or at least there should be a quid-pro-quo in this relationship.

While the State curtails your right to trade union membership, it also recognises your employer rights via pay negotiation models (conciliation and arbitration) that parallel those of other public servants. That is theory, at least. The practice over recent years, the wives would argue, has not lived up to that model, hence their protests.

So, to my two perspectives.

First, while the protest and the discussion on RTÉ’s Primetime last Thursday with the Minister of State for Defence [Paul Kehoe] has focused on the issue of allowances, there is another area which has drastically affected the average take home pay of the members of the Defence Forces in a unique way – overseas allowances.

I am not referring to the amount of these individual allowances, though I accept that is also an issue, but rather the number of them.

There are fewer Irish Troops currently serving overseas than there has been for well over a decade and a half. During my time in the Department of Defence there were over 800 Irish soldiers serving somewhere overseas at any one time.

As most overseas tours of duty last six months that means in almost any given year in the 1990s and 2000s over 1600 individual members of the Defence Forces would have served six months overseas and each received a daily overseas allow worth around €85 for an ordinary private. Bear in mind that most soldiers serve at least one six month overseas tour every three years.

By September 2011 the number serving overseas had fallen to 524. It fell further to 440 by June 2012 and stayed in or around that level until late 2016. The number has increased over the last year with around 630 troops currently serving overseas, its highest level in almost seven years.

Halving the numbers serving overseas as the government has done for almost five out of the past seven years has meant a huge additional drop in income for virtually every army family.

The second perspective is the damage that this is doing to the aim of public sector reform. The modernisation and reform of the Defence Forces that was undertaken in the late 1990s was a model for how the public sector can reform and do work more efficiently and effectively.

While other areas of the public sector were expanding their numbers, the Defence Forces actually reduced theirs, but not at a cost of efficiency and delivery.

The savings made in reducing both troop and civil servant numbers in the late 1990s were invested in better training and equipment, making our Defence Forces the equal of those they served alongside. We achieved an enviable reputation in both logistics and ordnance disposal, particularly improvised devices.

There has been a needless neglect and indifference shown from 2011 onwards. It started with the appointment of part-time ministers: Alan Shatter was minister for Defence and Justice, while Simon Coveney was Minister for Agriculture and Defence and ended up with the downgrading of the Department to being nominally headed up by the Taoiseach, but in reality managed by an ineffectual Junior Minister.

The fact that he had just appointed himself as Minister for Defence seemed lost on the new Taoiseach on the night he was announcing his Cabinet picks when he neglected to tell the Dáil that he would be the Minister.

We saw just how well meaning but ineffectual the Junior Minister he reappointed was when he appeared on Primetime last week to defend his non defence of our defence forces, but it was also on show in the last budget when Defence saw a miserly 2% spending increase at a time when, as Fianna Fáil’s Defence Spokesperson Lisa Chambers argued at the time, the growth rate is 3.5%.

It is regrettable that the wives and families of our Defence Forces find it necessary to take to the streets to make their case, but it is outrageous that the indifference and disregard of the current ministers put them in that position.

9 thoughts on “Soldiering On”