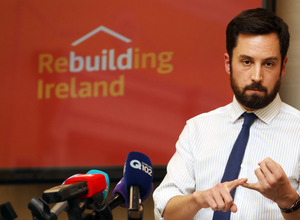 The Department of Public Expenditure and Reform has produced a useful analysis of spending on housing; in particular, the rent subsidy schemes.

When we put this next to the targets in Rebuilding Housing – the Government’s housing strategy – we can see how endemic subsidies to the private rental sector are. This poses challenges to policy-makers and activists in overcoming the housing crisis. 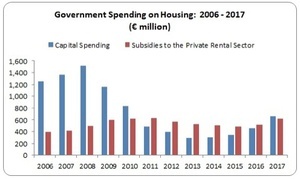 Subsidies to the private sector have also seen a rise since 2006, though slightly depressed following the crash.

In the years 2011 to 2016, private sector subsidies outstripped capital spending, though this situation was reversed last year. Between 2006 and 2017:

HAP has only been recently introduced and is intended to both replace long-term rent supplement programmes and allow recipients to work full-time. But it is already becoming a major spending item – rising from nil in 2012 to €158 million last year.

If we use a crude calculation – of dividing annual expenditure in 2016 by the number of households in receipt of subsidies – we find that the average spend per household is €5,600 with variations within the schemes. 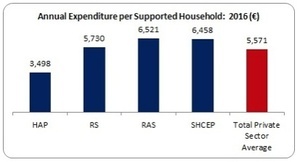 The Department refers to the Housing Agency’s Value for Money analysis conducted in 2011. The Agency concluded that traditional social housing (local authority) fared poorly compared to the SHCEP and the RAS schemes.

In other words, the state received better value for money by effectively leasing from the private sector than by building and possessing its own housing stock.

However, this report is heavily caveated. The Housing Agency admits that the data is limited and the year that they used – 2008 – may not reflect more current trends. It called for a new study to be conducted. The Department echoed this request, claiming that times (and costs) had moved on.

Really moved on; the Housing Agency’s study used 2008 as their base year. The problem is that rents have risen dramatically, and so have state subsidies to the private sector. A couple of examples from the Department’s paper:

HAP expenditure (the Housing Agency didn’t assess HAP since it was introduced after their study) rose from €2,675 per recipient in 2015 to €3,500 the following year, a rise of nearly a third.

Rent Supplement rates increased by 16 percent in the two-year period from 2014 to 2016 in Dublin; in Cork and Kilkenny the rise was 11 and 13 percent respectively.

Any new study would have to factor this in but, further, it should also take into account not only quality but the macro-economic effect of expenditure on market-led rents (opportunity costs) and future capacity.

And capacity is a key question. Rebuilding Ireland puts a lot of store in the private rented sector’s ability to absorb an increasing number of state-subsidised tenancies. 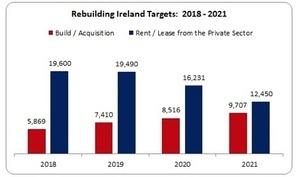 The reliance on private sector subsidies will continue, although it will tail off somewhat as the building and acquisition programme increases.

But in this four-year period the Government expects to create 67,000 new tenancies in the private sector.

A real question is whether this is feasible – is there capacity in the private sector to provide this number?

A related – and important – question is to what extent this will squeeze supply for tenants who are not eligible for state schemes?

This reliance on the private sector is not confined to rental and leasing. State acquisitions for the social housing supply merely transfer tenure from the private to the public sector. They do not actually create additional housing. In this four-year period the state is targeting only 28,000 new builds.

Let’s face it – we have dug ourselves into a deep hole and even with the best will and policies, it will take a long time to get out. All the more reason that we should have the latest data and the most comprehensive analysis to ensure that policy achieves the optimal outcomes.

Subsidies to the private sector will be with us for a long time. Already, 15 percent of households are in state-supported housing. Therefore, it is necessary that we have the right policies to ensure quality and security for tenants, affordability for the state and no downsides for others looking for rental accommodation.

The question that needs urgent debating, buttressed by quality evidence, is whether the reliance on the currently designed subsidies to the private rented sector passes those tests.

We should seriously look at the Nevin Economic Research Institute’s cost-rental model which breaks down this distinction and offers up rental accommodation for all tenants regardless of income or employment status.

Ultimately, there would be no ‘public’ vs ‘private’. There would be a single rental market – providing quality accommodation at affordable rents.

That would be the best value-for-money outcome.