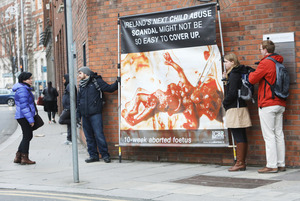 I wondered would it be possible to ask Legal Coffee Drinker about legislation to combat the use of disturbing images.

The relevant law is The Criminal Justice (public order) Act 1994, section 7. In Criminal Law (Charleton, McDermott, Bolger 1999) they specifically mention the use of section 7 against anti abortion campaigners.

If this is quoted to a Garda they supposedly can act on it. However, when it was quoted recently the person was told that ‘higher ups’ have said the imagery is not illegal.

It’d be great to get some clarity on this…?

“It shall be an offence for any person in a public place to distribute or display any writing, sign or visible representation which is threatening, abusive, insulting or obscene with intent to provoke a breach of the peace or being reckless as to whether a breach of the peace may be occasioned.”

As a minimum, it would need to be shown that the material was ‘obscene’ for it to breach Section 7(1). I have not been able to find any reported Irish cases on the point, but there is a recent relevant Australian decision.

In Fraser v County Court of Victoria & Anor [2017] VSC 83 (21 March 2017) the Supreme Court of Victoria (Emerton J) defined ‘obscene’ as “at the highest end of what is disgusting, repugnant, repulsive or offensive, having regard to contemporary community standards… images that are of the most seriously shocking type.”

Based on this definition, she held that the display of a poster featuring photographs of abandoned foetuses was the “display of an obscene figure in a public place” contrary to s 17(1) (b) of the Summary Offences Act 1966 (Vic).

This case represents a significant extension of the definition of ‘obscene’, previously defined by Australian courts [Crowe v Graham [1968] HCA 6; (1968) 121 CLR 375] as something which, by reason of the manner in which it dealt with sexual matters, transgressed the generally accepted bounds of decency.

Were it to be followed in Ireland, Emerton J’s definition would potentially prohibit the public display of anything offensive ‘having regard to contemporary community standards‘.

The difficulty is of course that even a short historical review shows many activities, exercised as of right in Ireland today, which would only a few years ago have been quite likely to satisfy this test.

If the definition of ‘obscene’ in Fraser is to be adopted for the purposes of suppressing posters by the pro-life movement, this could potentially have knock-on effects for freedom of speech and social change generally, a generation or so down the line…