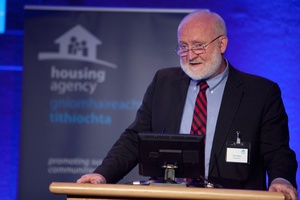 In January, Conor Skehan (above) chairman of the Housing Agency suggested some people were “gaming the system” by declaring themselves homeless ahead of others on council house waiting lists.

Usually, with this lark anyway, when something starts to itch, I sometimes live with it to let the more serious columnists have a go first; you know the ones you’re obliged to pay more attention ta ‘cause they get invited to things.

Well they’ve had since the New Year, so I’m taking it back; Gaming the System.

I quiet like the expression btw, and Gamer too. I should put it on my twitter profile if I remember, ‘might help me sound more Millennial maybe, and less WordStar.

But I am a Gamer.

There’s no denying it was a cruelly one-sided, callous and intentionally demeaning remark, but he wasn’t incorrect.

Social Housing is not just the Housing agency and those on the Lists, you can include Local Authorities themselves, Lenders, Voluntary Housing Associations, Tusla/HSE, various Religious Institutions, Charities and Trusts, and a city Green of Government Departments; ara’ ye get it.
And they all Game the System too.

From Budgeting to Funding to Spending, all requiring policies, procedures, measuring, monitoring and reporting; so too do Grant Applications, of every colour and source.

Like it’s not all about getting announcements into the Spin Unit. Any pretext to get more in via allocation of funding and manpower is engaged; consultants to review the consultants reports.

Any angle that gets in more money for less work, anything that promises them more control with less responsibility, any opportunity to get bigger with less accountability, and any chance where they can pay themselves above the extraordinary with no recourse; that’s hardcore level Gaming; like lads with the special seats n’ expensive head gear.

Minister Zappone when she opted to travel a different route to work to ensure the max expense allowance, and the many more on their way to Leinster House and its Departments, just as it’s no different with their Quango colleagues either.

Shur’ even when they run out of top gigs when it starts to get crowed at the top of all these Departments, Semis and Quangos, they just go off and create a new one. Tis like the lift to the top floor, only so many of them can squeeze in a once, so they make more room.

I myself know plenty within the Establishment, since that’s we’re calling them now, who are more efficient and knowledgeable about the full range of entitlements, allowances and benefits available; like uncertified sick days, lunch allowances and un-vouched expenses, than they are about their roles and responsibilities; Gaming the System features at all levels and they’re shameless about it.

Even Nóirin, like applying for her pension the same week she qualified for the full Commissioner was a coincidence? She even did it when on a month’s holiday…. All-star gamer stuff there, I wouldn’t be surprised if she ends up getting a medal.

Anyone remember seeing a local very backbench TD’s poster up here promising help with Hospital Waiting Lists? I think it was for cataract operations? There you go – Gaming the System.

A local councillor having a word and sorting a bitta Planning Permission? Or getting a word put in to have a Medical Card issued? Or the bould Lowry getting his legal expenses paid for work that now is legally classified as corrupt.

And it’s not just the public sector themselves, their retirees and their pals. Nor is it Politicians of every shade and rank either.

What about getting the child christened to get them into the local school? Yep, that too, welcome to the Game.

Anyone ever hold off on December invoicing, sales orders or depositing a cheque until the following January/ year? I have. We’re gamers.

Anyone ever have a mouthful of Pick n’ Mix before the weigh-in? I have.

What about chancing your arm by going into the schoolboys’ gate or getting a juvenile ticket? Ha. Don’t ya know it.

Here’s one. Anyone put up a wall or knock one down, throw in an attic extension, convert something, add another space onto the gaff; wait the 5 years and apply for retention? Well, someone reading this has.

Anyone apply for the exemption from Irish in the Leaving Cert? Gaming the system.

College Grants, Fees? Anyone omit the other part-time job? Or enhanced their medical condition, or have a field set aside for forestry?

But here’s the thing about Conor Skehan and the attitude of the Housing Agency Exec, who ultimately reports to a Senior Government Minister/Ministers. They are the very last group of people that should use the expression Gaming the System as if it was a disease spread by rats.

Our current Taoiseach is a man with only a third of the Fine Gael Membership supporting vote. The very same man who accused Social Welfare (apparent) Cheaters of Cheating us all. The Gamer Himself sits right there @campaignforLeo Top Scorer.

I won’t deny that every word here is fit for the same blender. But do not allow anyone accuse those in need of Social Housing or any other assistance, of Gaming the System without reminding yourselves that we’re all no different from each other.

We may all have different walks in life and play at different Levels and from different settings.

But never again allow anyone be accused of Gaming the System, and not feel offended yourself.