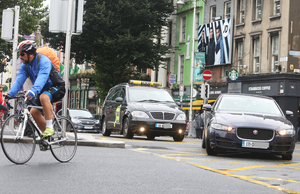 The most recent statistics released by the Society of the Irish Motor Industry (SIMI) show a 10.5% year on year decrease in the registrations of new passenger cars. This has got some who claim to be able to read economic tea leaves worried.

For some perverse reason the increase in car sales has been taken as an indicator of improving economic wellbeing.

The theory goes that people purchasing more of these vehicles is a sign that greater amounts of disposable income are swirling about, and that consumers are more prepared to buy the type of good they otherwise would avoid purchasing during a recession.

I’ve always treated this particular statistic with a huge amount of disdain.

Even the acronym SIMI is loaded with ironic deceit. Ireland does not have a motor industry. We do not make cars.

What we have is a motor retail sector. Each car purchased here impacts negatively on the country’s balance of payments. The obsession with this statistic tell us very little about our economic health.

This preoccupation with the motor car has seeped into too much of our official thinking and approach to strategic planning.

In the past number of decades any attempt to more fairly distribute land use, such as by pedestrianising streets, introducing bus lanes and cycle lanes, or providing planning for new apartment units without parking, has evoked knee jerk reactions that the car owner, and by extension the car itself, is being inconvenienced by these changes.

These are end days for the fossil fuel propelled vehicle. It can be argued that the development of the motor car has been the most significant, and most liberating, means of social change in the 20th century. Now we need to move on.

A more honest cost benefit will reveal a price has been paid for this greatly enhanced freedom to travel. That price has come in the form of ever deteriorating air quality, and millions of deaths and horrific injuries from motor vehicle accidents.

The use of cars has had, and continues to have, an enormous value. However, we have tended to over celebrate that value.

In elevating car travel as our primary, and often our sole means of travel, we have produced a lop sided transport infrastructure that has relegated those who choose to walk, cycle and/or use public transport, to the status of second class citizens.

Share the space should be our motto in developing future infrastructure. That means that a collective realisation needs to be accepted that door to door transport, by a single means of transport, will soon become impossible.

With that the very concept of car usage will change. Already growing numbers of people are becoming less interested with the idea of owning cars. Some are renting more, leasing more, sometimes for periods of a little more than an hour.

We should be incentivising and investing in transport alternatives. We need to make those alternatives more convenient, more reliable and less expensive. We must make the cultural shift away from the belief that insists that the car is the epicentre of our need to be.

What it is, is the thing that is holding us back. It’s time to let go.

93 thoughts on “Letting Go Of The Car”