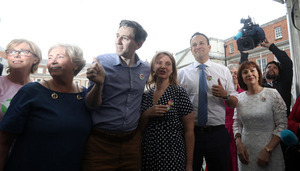 From  top: Taoiseach Leo Varadkar (second right) and Minister for Health Simon Harris in Dublin Castle as results to repeal the 8th Amendment were coming through

Happened again yesterday. Happens most days now. They see you. A moment of recognition. A raising of the eyebrows. A gentle smile. And you do the same. It’s a moment. A kind of community. A sense of belonging. You’re not stopping. You never do. You don’t know each other well enough. But it’s still warm. Always was.

Then the smile stops. The lips tighten. The eyes deaden. Repeal remembered. They forgot to remember to hate you.

Many are from the Arts. The world of film, theatre, television and books. Compassionate. Good people. Some are cowards. That’s inevitable. But some are not. Some are even talented. Some are even activists. Some even reflect that in their work.

Their result was a foregone conclusion. A campaign too brilliant to fail. Initially, I was conflicted. But I was on their side. I had to be. That’s what community means. Until they forget to remember to hate you.

So I did what I always do. Did what I should do. Did what artists are supposed to do. Sought out the underdog. Searched for the other side. Listened to the opposite.

But this wasn’t a time for questions. This was a time for banal acquiescence. Blind obedience. Political absolutes. With or against. Feminist or misogynist. Yes or No. And when you vote, don’t forget to remember to hate.

Equality is a tool of division now. Compassion an ideological weapon. Human rights sans the human. So what if you’re conflicted? So what if this was devised to divide? I’d still be on their side. Still defend them. Still present both sides.

Even after the comical unfriending. The defiant blocking. The shameful prejudice. The rabid ridicule. By the new radicals. These fearless feminists. These political women and men. These masters in the art of never forgetting to remember to hate you.

Some of them say a zygote has no identity. A fetus has got no soul. No reason to be included. No rationale to be alive. No constitution to protect them. And that’s the done deal now. The good people have spoken. Death by Democracy.

Even then, I’d still try to see their side. Still empathise. Still understand. Despite wondering how censorship had become a badge of honour. Despite realising you can’t pose the wrong questions. Despite asking yourself what kind of dumb fuck are you to forget to remember to hate?

Then that day happened. Not the election. Not the result. Not the campaign. All of that I could understand. It was that damned day in Dublin Castle.

And you realise you’ll never understand. You realise you know nothing. You realise your soul is lost. Your mind is bludgeoned. Your heart is crushed. Your belief has bled out. And that might be why you notice those constant smiles that turn stern. That warm that turns cold. That compassionate rejection.

From people you still respect. From women and men you still adore. From the work you still love. From the community you still embrace. Even if they never forget to remember to hate you. 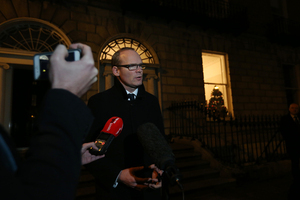 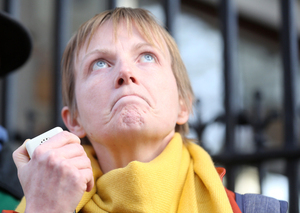 101 thoughts on “They Forgot To Remember To Hate You”