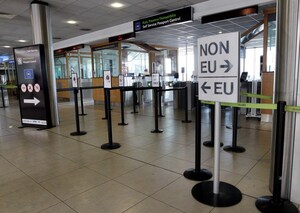 Over recent weeks there has been quite a bit of fanfare regarding the reversal of the brain-drain.

‘Emigrants returning home in their droves’ went the headlines and with it the underlying implication that this should underline to us that things really have turned around and Ireland Inc. is back, baby!

Minister for Finance Paschal Donohoe et all have, and will continue to, use this news to tell us how Fine Gael have supposedly turned things around; how they’ve got the economy back on track. Right so, Ted.

Funny then that there has not been quite as much fanfare for the other side of the story; the surveys of returning emigrants and the tales of their shock at discovering just how inhospitable Ireland Inc. has become for anyone hoping to live an average or even above average salary or two.

These stories have been covered but they didn’t attract the news heads or the ‘What it says in the papers’ slots in the same way that the good news story of the returning numbers did.

Unless you read deep into the pages of the newspapers you’d likely have missed the coverage of the results of the surveys conducted with returning emigrants or those who had considered returning.

You may not have heard how a lot of those that returned are already considering leaving again or how they have had to relocate far outside the city they intended to return to just so they can scrape together a semi-normal life.

A couple of months back Ciara Kenny in the Irish Times spoke to some returning emigrants who outlined some of the barriers to relocating here.

The fact that there is a significant waiting period to receive child benefit – 16 months in some cases; the reality that motor insurers won’t consider driving experience abroad or before you left as qualifying driving experience thus giving people exorbitant car insurance quotes; the childcare costs; the school waiting lists; the shortages of GPs; the costs of medical care and/or health insurance; but mostly they speak about housing.

They speak about the shock at finding they are expected to pay in the region of €2,000 for any kind of average one or 2 bed place in Dublin city and not much less for a similar place even with a long commute.

They make comparisons with the cities they have left and discuss how their housing costs fared relative to their take-home pay; the difference being that while abroad they were not shelling out 40-60% of their income on housing whereas that figure has become the norm here in Dublin and some other urban centres nationally.

Another piece in the Irish Times last week focused on people moving to the West of Ireland to try and arrest the current assault on their income caused by the ridiculously high cost of living in urban centres.

The feature had a mix of young professionals and older more settled families with decent incomes. They all struggled equally to manage the cost of living in Dublin and all decided – some out of total necessity rather than choice – that it was no longer sustainable.

Do we factor this into stories about the brain-drain? I suspect not.

We’ve a country that people want to live in yet increasingly many are finding that they simple can’t afford to live in it. That’s an equation that can never balance.

Dublin is now one of the 10 most expensive cities in the world to live in – mostly due to its sky-rocketing rents but many other factors are also critical components of this ranking including the cost of consumer goods.

While our inclusion on some of these ‘most expensive’ can be attributed to the strength of the Euro vis-à-vis the dollar, those of us living in Dublin know that is quite simply bloody expensive to live here.

It is imply unsustainable for a household, whatever its composition, to pay put 40-60% of its income on housing costs and then try to manage other costs such as ever-increasing utility bills, childcare costs, transport costs, etc., etc.

The cost of living in Ireland, particularly the urban centres is too high.

Anne Marie McNally: Event Management Based On Perceptions Of An Ireland From A Bygone Era

66 thoughts on “Anne Marie McNally: Can You Afford To Come Home?”