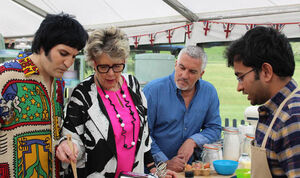 A week after taking the biscuit

Yes, its Cake week, which is what it’s all about, and I’m am absolutely confirmed in my opinion now that they shouldn’t have started with biscuits.

Cake is a far more relevant entry exam for Bake-Off Tenters and last night proved that beyond doubt.

Every baker, no matter how diligent or occasional they are should have a daycent traybake within their set of recipes and abilities. And if you’re like me you’ll have developed two oul’ reliables; one for the smallies and a grown-up one.

You should also have two tray options; square and rectangular, and as with all kitchen paraphernalia, tools, and appliances, always get the very best you can afford.

I’m telling ye all this ‘cause last night’s signature was a great demonstration of what the everyday baker can do very simply, and most importantly, tidily.

Traybakes don’t need trappings like sugar twirls or piped ornaments on top like you saw last night to be any less than they are.

There were loads to choose from last night; but for the grown-ups I would have to recommend Terry’s rum n’raisin, although I’d skip the candied walnuts; OK there are loads of ingredients to measure out, but most kitchen presses would have them anyway.

Briony’s Turron and Orange would make great treat-eats, but d’ya know wha’, I’d no more make marmalade than take up jogging. Also, something for my unlikely to-dos is to finalise a Lemon Meringue traybake recipe; if it ever happens ye’ll be the first t’ know.

While I’m here on traybakes, I need to disclose that I love Black Forest an’ting; but for me all that fresh cream and kirsch is wasted on a shallow tray measure; Black Forest deserves to be full-on drag, all glammed-up and never in a corner as a baby no-guilt sized portion. Nonetheless, it’s clear the two last night got away with it.

When a Le Gateau Vert was revealed as the Technical it got greeted by a garish and earthy ah’ ffs and its getting another one here now – ah’ ffs! Like why would ya be arsed? Spinach? Pistachio? Green cake?  Garish is right for it all day long.

I would stop on about it now only I think I should point out that Monet loved his grub, so I’m obliged to mention this book since Broadsheet is all about the non-fiction lately.

And that was a handy tip from Jon  about blending your butter with a dab of your cake batter before adding into the full mixture.

Jon is obviously one to watch already, and I think Bread week might be his star turn, yet I’ll remain open about them all and there’s no favourite yet for me. Although unlike the Black Forest, Anthony’s Bollywood smiles are long past their clichéd date already.

Yay! Showstopper time now. But they were far from yays last night; loads of promises alright but nothing you’d put into a shop window really.

OK none of us temper chocolate  at home, well maybe Martco does. But then he has a kitchen crew to clean up after him.

Most of us don’t do fancy stuff with chocolate or sugar because its too much cleaning up afterwards, you need specialised kit and it all tastes the same anyway.

I’d no more bother with a chocolate collar than I would iron me tea-towels. That sorta carryon is just for the telly or for places that charge eight yoyos for a slice, and a mane one at that.

One showstopper I want to mention is Luke’s Raspberry & White Chocolate. OK,  he made a hames of it and had to go, but that cake promised so much and still does as it has everything the Irish palate loves, craves, and deserves. So just for ye, I have reached out to the lad and asked him for the recipe.

Some final bites from last night;

I hope the Hollywood doesn’t get handshake regret after last night. None last week, but he lost the run of himself with cake week.

Star Baker Rahul is no doubt a serious and accomplished baker but has yet to make something I would try myself or even recommend. I’d go so far and say even now in the early days – I don’t think he’s going’ta make it into the big three.

Probably my favourite BO innuendo ever; six inches takes 45 minutes eight about an hour; not in my experience but who am I to contradict so enjoy.

And I’m loving the range of accents, but tell us, would it be a Commonwealth of accents or an Empire d’ye think?

Next week for the rising and somehow, maybe tis just me and that chintzy ‘tash, but I don’t think Terry is cut out for it all.

In the meantime, for convenience and t’ keep things more orderly @bakesheet is now set up on the twitter so tag on.

44 thoughts on “The Home Of Cake News”