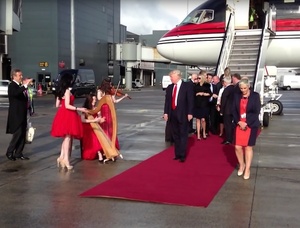 From top: Donald Trump arrives in Shannon Airport in May, 2014; Dan Boyle

Few here in Ireland claim to like Donald Trump. Even fewer people would claim to admire him or support his policy approach.

He has some friends. Those who admire the red tooth and claw capitalism they see in Trump, who, while as inarticulate as themselves, is sufficiently in your face to ‘own’ the liberal left.

He exists, despite his obsession with building a wall, to metaphorically tear down walls of regulations produced through liberal democracy, in pursuit of a fairer World.

Despite having had nothing but centre right governments since the foundation of the State, Irish Trump fans see Ireland as a something of a Socialist bedrock.

Our current socialist government in the form of Fine Gael, have been constructing a ‘how many angels on the head of a pin’ approach to both welcoming and not welcoming Donald Trump at the same time.

By its thinking we are not welcoming Donald Trump per se. We are welcoming the holder of the office of President of the USA, and a failure to welcome him properly will be seen by our American friends as a collective snub to all other holders of the office, past and future.

Bollocks to that. The nature of friendly relations between countries is that one can tell the other when they are fecking up royally, or, in Trump’s case, bigly.

It is the current administration that carries the can especially for policy positions that have currency – policies on trade, migration and the environment. Policies, on each of which Trump and his administration want to take us back to some perceived feudal heyday.

In all likelihood Trump’s motivation for wanting to come to Ireland has nothing to do with wanting warmer relations with Ireland.

The probability is that he wants to visit his golf course at Doonbeg, County Clare, as part of his global business promotion tour, rather than make small talk with our Taoiseach and the Minister for Foreign Affairs.

The people in Doonbeg, especially those employed at the resort, will in all likelihood look on with disdain at protest made there. This is understandable. However Trump thrives in these islands of dependency, where silence and blindness is bought.

Others would argue that the best way to protest Trump is to ignore him. There’s a name for that – it’s every other day in Ireland.

Without a large scale, physical manifestation of protest, Trump could rightly claim that Ireland is on his side.

Trump is a complete narcissist. He reacts negatively to anyone who is negative towards him. Large scale protests in London, in Brussels and in Washington do get to him.

I remember being a part of the 2003 No to War march, where 100,000 filled College Green and Dame Street. We may not achieve that scale, but the protest to Thump should be, can be and will be an event of that type.

The difficulty is that several groups want to see this protest happen for a myriad of reasons. There are many reasons to do so, but let’s make sure it brings together as many as possible under a collective banner.

This is a circumstance where we should put aside ego and positioning. Let’s have a welcome in the hillsides. Let’s give Donald Trump the welcome he deserves.

55 thoughts on “Dan Boyle: Guest Of The Nation”