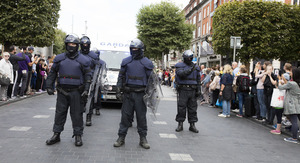 On Tuesday morning, I listened to Fianna Fáil TD Jim O’Callaghan tell RTÉ Radio One’s Morning Ireland that he was opposing Minister for Justice Charlie Flanagan’s proposal to make it illegal to film Gardaí on duty.

I was pleased to hear him oppose such a regressive proposal but then he immediately followed it up by saying:

‘We don’t need to change how policing happens in Ireland.’

He went on to speak about how Irish people like the openness and transparency of how An Garda Siochana operate.

My initial open mouth shock at that statement was matched only by the irony that he would say it on the same day that the Commission on the Future of Policing in Ireland was due to publish its report; a report which was commissioned precisely for the reason that policing in Ireland needs to fundamentally change!

It doesn’t just need to change because of the many high-profile scandals which revealed a serious malaise at the heart of how the Garda operate; the Maurice McCabe scandal, the McBrearty Scandal, the Corrib Gas line scandal…I could continue.

But it also needs to change because on a day to day basis there are quite simply, toxic elements to the way in which elements of An Garda Siochana conduct their duties.

I will immediately balance that statement by saying there are also, thankfully, many elements of the force, which act with complete integrity and are an example of how policing should be.

But those fantastic men and women who uphold the best parts of what An Garda Siochana should be are the ones who will most welcome a changed force which not only recognises the toxic elements of the force but takes real action to eliminate those elements.

That old cliché about the first step to addressing a problem being the acceptance of it seems appropriate here. We cannot allow our knowledge and legitimate criticisms of the toxic elements of policing in Ireland be muted for fear of being seen to denigrate the best parts of the force. It is not either or.

Many of us watched in disgust at the heavy-handed and in some cases, frankly illegal, ‘policing’ which sparked high-profile protests and demonstrations across the USA.

We then watched as the policing of those protests became aggressive and damaging – recall the images from the Berkeley Protests or the Ferguson riots where horrific images of both masked and unmasked police officers baton-charged, pepper-sprayed and tasered protestors.

Similarly on the Standing Rock protests many were horrified at the images and the subsequent revelations of undercover police operations infiltrating the movement and causing damage. We cannot look abroad without examining ourselves and the Shell to Sea protest is one that stands out in relation to abhorrent Garda actions.

Do we really want to get ourselves into situation where we allow Gardaí to determine what they deem to be legitimate civil protest or not and if they deem a protest illegitimate are we happy for them to act with impunity in relation to masking themselves and sometimes carrying out acts of aggression?

I certainly won’t accept such a situation.

The Irish Council for Civil Liberties (ICCL) recently launched a report on human rights based approach to policing. This report is a direct response so something I’ve witnessed daily, first-hand growing up and then living and working in a disadvantaged inner-city area.

For the handful of amazing Gardaí I dealt with – those who went out of their way to engage with local youths and who worked with and for the community – they were unfortunately outnumbered by the amount of times I had to watch my peers getting ‘a few slaps’ from a Garda or being called a scumbag etc. just for the crime of maybe walking with their mates through their own neighbourhood.

The same is true of the policing of protest – and make no mistake it is a very specific and well-researched policing (& political) tactic to find ways to dehumanise and criminalise those involved in civil disobedience as a means of turning public sentiment against a protest.

The same is true of protests and protestors. Dwight D Eisenhower once said: “May we never confuse honest dissent with disloyal subversion” and I can’t think of a more appropriate quote in the current context and it is applicable to those on both sides of the protests.

Anne Marie McNally: Can You Afford To Come Home?