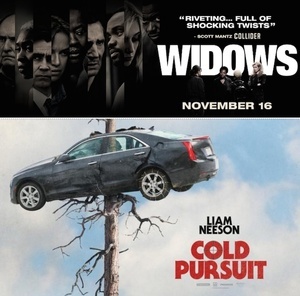 2. Everybody’s favourite growling, artistically unpretentious Ballymena man has two big roles coming up, and appears to be subscribing to the “one for them, one for me” method of choosing. The question then becomes which one is which?

3. First up, Steve McQueen’s Widows. What’s interesting here is that Liam’s somewhat ironic, happily-married-man-of-action screen persona is being put to intensely dramatic effect. OK, it seems he’s out of the picture in the first act, but McQueen, like every director who has hired Neeson since Taken ten years ago, is clearly impressed with his particular set of skills. (i.e. acting really well and being a double-hard backstard).

4. In Widows, Viola Davis and Michelle Rodriguez star alongside newcomers Elizabeth Debicki and Cynthia Erivo. Female-led action thrillers have always been few and far between; while Widows is undoubtedly more complex, it doesn’t look a million miles away from 1996’s Set It Off, in which Queen Latifah, Vivica A. Fox and Jada Pinkett…y’know…set it off.

5. Among the storming supporting cast, special mention should go to Jon Bernthal, who has been a standout in everything he’s done so far.

6. Farreller is in there too; he’s made some really impressive choices in his roles the past few years and settled into middle age very well. We’ll be seeing him in high places for many years to come yet. Next year he’s starring in, ahem, Tim Burton’s Dumbo.

7. Now, Liam’s one for them. Say hello to the marvellously-named Cold Pursuit.

8. That name again is Cold Pursuit.

9. The first portion of this promo is standard Liam Neeson fare, until the Guy Ritchie–style name cards start flying all over the place and it all goes a bit Fargo.

10. The tone is slightly confusing here. A movie in which Liam Neeson goes around cracking heads, but that also looks interesting, if not particularly original? It wouldn’t be the first time. The Grey (2011), in which Liam straps broken glass to his fists and fights a wolf, turned out to be one of the best films of the decade.

11. Another special mention for Laura Dern, who magically reappeared the past couple of years and is now, luckily for us, in everything.