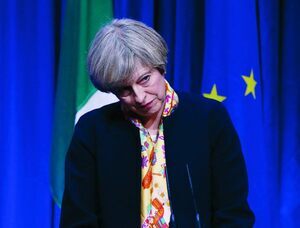 Indefatigability. I like the word. Though more prosaic than poetic, I even like how it sounds. But it is the quality which it describes that attracts me most: dogged persistence, the cussed determination to keep on keeping on.

It is a word which fell into disrepute after it was deployed in 1994 by far-left British Labour MP George Galloway, in cringing televised audience with Saddam Hussein.

Galloway concluded his unperforated imitation of a wad of three-ply Andrex (other brands are available) with the peroration:

While the taint of Galloway undoubtedly did the word harm, it is time to reclaim and rehabilitate it, not least as it is the best available word to describe Theresa May’s relentless commitment over the past year.

When future historians come to rank the British Prime Ministers of the past 100 years, May will appear well ahead of her immediate predecessor, David Cameron, on the list. What she lacks in style and charisma she makes up for in fortitude and resolve.

It is difficult not to admire her ability to withstand the fiercest and most vituperative criticisms and to manage to conclude negotiations on a Withdrawal Agreement, even a flawed one.

She has gone a long way to square what seemed to be an unyielding circle and secured a deal that delivers on Brexit by taking the UK out of the EU institutions.

She has done this by constructing a clumsy, if not grudging, relationship with the EU Customs Union and Single Market that will not excessively damage UK business or impose border infrastructures either on or around this island.

She has also managed, though most of the credit should go to Michel Barnier and his team, to design a situation that could allow Northern Ireland to become an EU/UK hub or gateway, putting it in an economically beneficial situation for the first time since its creation almost a century ago.

It is an achievement that has not been lost on the Scottish government. Indeed, the possibility of Northern Ireland having an economic advantage over Scotland is the reason why the SNP at Westminster will oppose the Agreement.

How ironic that Northern Ireland’s economic viability could be secured in a deal which the DUP will fiercely oppose and on which Sinn Féin will abstain. Further evidence of how broken politics in Northern Ireland has become.

But while Theresa May is deserving of admiration for what she has managed to achieve, we on this island – North and South – should not allow this to turn us into cheerleaders for the Withdrawal Agreement.

Yes, the deal is far preferable to a disorderly no-deal-Brexit, but there is still another and far better option available: a second referendum. A #PeoplesVote where the choices are (1) this deal or (2) No Brexit. It is the option now favoured by many across the political divide.

It is the option which Tony Blair backed strongly last week in a well-argued opinion piece for the Daily Telegraph and his Institute for Global Change website.

Though I have argued here in the past that holding a second referendum on Brexit could cause as many problems as it solves, particularly given the big turnout in the first one, British politics is now so divided and bust that I too have come to the conclusion that there is now no other way to resolve the folly of Brexit than by going back to the people.

The harsh reality of the House of Commons arithmetic is that it is impossible for Theresa May to construct a simple majority for the Withdrawal Agreement.

May will not get the support of all her own Tory MPs. On one side there is a tranche of 40-50 hard-line Brexiteer Tory MPs determined to oppose her Withdrawal Agreement on the erroneous basis that it concedes too much to Brussels.

On the other side there is the smaller counter group of pro-European Remainers, such as Dominic Grieve, Jo Johnson and Anna Soubry who will likely oppose the deal because it takes the U.K. out of the Customs Union and the Single Market.

This leaves the future of the deal in the hands of Jeremy Corbyn’s Labour party.

But Corbyn says he opposes the Withdrawal Agreement and that he could quickly negotiate a better deal with the EU, though that would presumably require an election.

Unless there a sizeable group of labour MPs are prepared to defy the whip, cross the floor to back May and risk the possibility of deselection at the hands of Corbyn’s “momentum” faction – then the Withdrawal Agreement is as good as dead.

This is dangerous situation as the likely default position in that event is a no-deal Brexit.

In this scenario – and right now it is the likeliest one – a second referendum as the only viable route out of the impasse. As Tony Blair argues:

“We need unity after the Brexit division. It can only come through clarity. And the only route to clarity is through the people. It may seem improbable; but everything else is now impossible.”

Though the clock is ticking fast and the window for holding a second referendum is closing, it is easier to construct a Commons majority for a second vote, especially among Labour MPs, than for May’s deal.

But there is another, more selfish reason, why we in Ireland should be using our influence to urge a second referendum and a complete rejection of Brexit.

Stopping Brexit entirely and keeping the U.K. in the EU institutions, in the Commission, the Parliament and, most importantly, the Council is in our interest as it is the only way we can keep our closest political ally in the EU by our side.

Ireland and the U.K. have each been the others most important ally since we joined the EEC in 1973. Though not always ad idem, we have shared a common outlook and approach to most economic, tax and trade issues and our interests have aligned better with those of the U.K. than any single other big player.

We need the U.K. at the Council table over the years ahead as issues such as the consolidated tax base and common defence and security are discussed.

While Varadkar and Coveney may feel that they have personal and party political capital invested in seeing the Withdrawal Agreement succeed, our long-term national interests will be far better served by stopping Brexit and a second Brexit referendum is the now the only way to do that.

Derek Mooney: A Week On And Getting Weaker

11 thoughts on “Derek Mooney: May Is Indefatigable But A Second Referendum Is The Better Option”