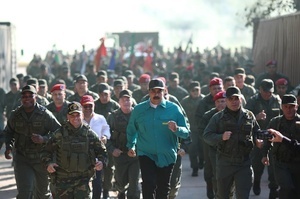 Recent events in Venezuela demonstrate that the US continues to be heavily involved in shaping political events in the region. The idea that an opposition leader could declare himself president without prior approval from the US State Department would be anathema to the mandarins that inhabit its offices.

US history, not only in the Middle East but especially in Central and South America, is replete with interventions, support of dictatorships, and abiding the massacres of civilians. In Venezuela, the former president Hugo Chavez represented an affront to American vying for dominance.

His successor Nicolás Maduro continued with this impertinence by daring to represent ordinary people and not the rich elite. Considering the scale of American violence in neighbouring countries, it is surprising that any kind of socialist government has lasted this long.

Venezuela has not been the victim of outright violence on behalf of American-backed and CIA-trained death squads.

However, it has had to endure years of sanctions and the funding of opposition parties and individuals in an attempt to undermine the successive governments of Chavez and Maduro.

During the coup attempt against the former in 2002, it was discovered that an American-registered plane had landed in order to take Chavez out of the country after his capture by opposition forces.

And similar to recent events, the US government was quick to recognise the new president, Pedro Carmona, who had taken over the role after Chavez was kidnapped from the presidential palace.

What we have seen in Venezuela over the last week, then, is a replay of events from years gone by. This history can be seen not only in Venezuela. The same tactics have been utilised in other countries where the American government has had its interests threatened by democracy and democratically elected leaders.

In Chile, Salvador Allende was seen as a socialist threat which meant he had to be eliminated in favour of a military dictatorship. In Nicaragua, the Sandinistas could not be allowed to effectively govern their country given the obvious malignity of their land reforms and socialism.

Therefore, massacres against them and their supporters by the Contras – funded and trained by the CIA – were to be countenanced. In Brazil, the longstanding military dictatorship enjoyed the approval of the US government.

And let’s not speak about the decades of sanctions and terrorism inflicted on Cuba for having the audacity to attempt the implementation of an economic model other than the one that is currently ravaging the globe. What is taking place in Venezuela when we consider the above, is nothing remotely new or unique.

The ideology that informs this behaviour on the part of the US is the Monroe Doctrine. Promulgated in 1823, it declared that Latin and Southern America was to be the exclusively dominated by the US and its interests. All political and military interventions in the region on the part of the US have rested on this racist premise.

Venezuela, with the ascent of Hugo Chavez, represented a slap in the face to the business as usual model of using the region as a cheap source of both labour and resources. Venezuela in particular was utilised for its vast oil wealth.

Historical context such as this tends to be missing in much of the pontificating in the mainstream media about human rights abuses and food shortages in Venezuela. If it was given the attention it deserves, most people would realise that the country did not implode of its own accord due to the supposed failures of state socialism.

Years of continued sanctions, isolation, and the consistent backing of opposition parties and movements in the country has undermined progressive changes made by the respective Chavez and Maduro governments. Instead, the Right-Wing opposition was to be encouraged and funded.

In light of the fact that the US was so quick to recognise the self-declared presidency of Juan Guaidó, it is demonstrative of their continued need to control the region and its leaders.

Having lost some control of the region in recent years to popular leaders, such as  Chavez, Evo Morales, and José Mujica, the US government appears to be attempting to reassert its influence via whatever means necessary.

Part of their tactics to reassert control — and a recurring theme before the US and its allies go to war — is their concern about human rights abuses in Venezuela. This is nothing more than an attempt to cover their real agenda.

The appointment of Elliott Abrams to “help the Venezuelan people fully restore democracy and prosperity to their country” is a testament to this.

Abrams is notorious for his tenure as Assistant Secretary of State for Human Rights and Humanitarian Affairs during the Ronald Reagan administration. In this role he supported regime change in El Salvador and Nicaragua, and offered support to CIA-trained death squads.

He was also involved in the Iran-Contra scandal and lied under oath about his role in the scheme during a congressional investigation of the plot.

He would later go on to become a founding member of the Project for a New American Century. This neo-conservative and extremely hawkish group of former government officials and academics, literally wrote the blueprint for the invasion of Iraq in 2003.

What lies ahead for Venezuela and its people is uncertain. However, to leave their future in the hands of a man who is, by all reckoning, a war criminal is to ensure the destruction of their society.

Already the self-appointed government of Guaidó has taken the initiative in this regard and has called for assistance from the IMF. Apparently this is to fund his government along with following through with plans to privatise Venezuelan industry, specifically the oil industry.

In plans drawn up before the coup, Guaidó’s opposition detailed that it would aim to introduce a “model of freedom and market based on the right of each Venezuelan to work under the guarantees of property rights and freedom of enterprise.” In other words, a neo-liberal paradise.

For Venezuela to fall once again under the yoke of American imperialism and corporate interests would be a humanitarian disaster. Juan Guaidó and his lackeys understand this.

It is just that profit and cosying up the most powerful nation in history is of much more interest to them than theoretical notions of human rights and economic justice.

Any and all attempts at eliminating, or even lessening the effects of, poverty must be crushed. Otherwise the bottom line would be forced to suffer the ill effects of slightly lower figures.

In 2002, an Irish documentary crew was in Venezuela to film the Chavez government and look into the changes it was implementing when they got caught up in the coup attempt.

The finished product resulted in the great documentary, The Revolution Will Not be Televised. At one point Chavez is filmed telling an associate that the neo-liberals, “They’re the ones who’ll end up destroying the world.”

Chavez may have been correct in this assessment. Right now though, it seems as if they are intent on destroying Venezuela.