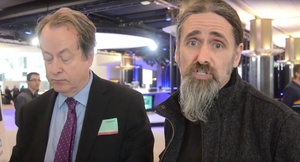 From top: Master of the High Court Ed Honohan (left) in Brussels with and Luke ‘Ming’ Flanagan MEP; Bryan Wall

The 2016/17 amendment to section 110, the SPV (Special Purpose Vehicle) instrument that serves vulture funds so well, appears to have been written by the same people who would be the leading beneficiaries of the amendment.

Master of the High Court Edmund Honohan, when trying to woo Ming the Merciless (Luke Flanagan MEP) and some guests in Brussels recently, in the hope of getting the EU Commission to investigate anomalies in Ireland’s tax laws on a state aid angle, admitted that the whole thing is a complex mess and spent an hour trying to explain the mess.

I spent two hours trying to understand the mess he was explaining.

One of the problems with trying to understand the mess is that the language used by our representatives seems to be deliberately designed to fog everything, and succeeds admirably.

The mess is either a deliberately designed mess, even a sophisticated mess, or it is an unintentional mess. It is either genius or incompetence. Not even Honohan can be certain.

Honohan contrasts the language of Ireland’s legalese with EU legalese. EU legalese is designed to be simple, working towards clarity, this is its main concern; while Irish legalese seems designed to achieve the exact opposite.

This might well be a strategy to wear everyone down so that they won’t even bother trying to unravel the language knots and won’t discover things like the amendment of section 110 being written by those it favoured, who appear to have created a kind of club where you need €10million to join, and if you join you can be re-classified as a charity, making you tax free on property transactions.

Or the wording of a related amendment to the same instrument that allows the person making tax returns to define what is understood by “normal accounting practises”. Which seems to mean, you tell us what you think you owe us by your criteria and we’ll accept that.

The taoiseach says the amendment to section 110 was a way to get the economy moving via the property market. David McWilliams says that the same end could have been achieved via the credit unions. That there was no need to invite in vulture funds.

The section 110 instrument was once a relatively standardised securitisation instrument, designed to manage taxation in response to 24-hour banking made possible by the internet. It was nothing sinister.

But it went from being an innocent finance tool, to being a kind of rogue SPV as a result of the 2016 amendment. Honohan described the amended SPV as a kind of genetically modified SPV.

Prior to its metamorphosis, the section 110 SPV dealt only with abstract calculations in cyberspace. Now it was suddenly let loose in the real world, making drastic changes in physical reality, resulting in people being dumped from their homes and into hotels, enriching hoteliers, with the hotel bills being underwritten by the tax-payer, among whom no investment corporations exist; while the properties were re-rented or re-sold at enormous profit to investment corporations.

“We remind all States,” said a recent UN report, “that while gold is a commodity, housing is not, it’s a human right.”

The taoiseach – the same man who declared to the Dáil that there is no such thing as a free house and who was recently corrected by the UN who declared that housing is a right – described the new window created in the 110 SPV as a “loophole” and promised to close it next Autumn. It has to wait for the Finance Act time of year to be closed.

It seems a major leakage of public money into the stratosphere is not enough to declare an emergency gathering to close the window. This in the same week that another Fine Gael minister talked about imposing fines for wasting water.

In the meantime, the loophole will continue to be exploited by the investment corporations/vulture funds, and whoever else happens to be in €+10m club, until the government gets it together to close the window..

They have lots to do in the meantime while lost revenue gurgles down the drain. They can be overseeing the Brexit mess with superior attitude; they can think about calling an election; they can take a summer recess; maybe attend a few summer schools; maybe some summer sporting events; maybe a high-profile pop concert for maximum feel-good PR exposure; take their hols…

The window in the 110 SPV isn’t actually a loophole. It was designed. The taoiseach said so, in the same statement in which he described it as a loophole.

It’s a kind of Schrodinger’s Cat of Irish tax law. It’s a loophole, but it isn’t. It’s a tax-break, but it isn’t. You’re a charity, but you’re not. It’s whatever you want. Here, you have €10million, write the legislation yourself! We’re all winners in this fine mess we’ve gotten us into!

The “loophole” was carefully designed to attract foreign investors to make a killing in the Irish property market in order to get the banks and the economy jump-started. It worked, by the simple expedient of allowing the banks to sell off bad mortgages to tax-free vulture funds who kicked out tenants in arrears and Presto! A new property bubble on the rise and Ireland is back in business.

Sure, there was some collateral damage. Like the 10,000 homeless, the hungry private renters, the underpaid, exploited and the new Irish emigrants away into exile with stars in their eyes because they can’t afford to rent a room here.

But hey! you can’t make an omelette without breaking a few eggs and it is clear from the stats that everything is working towards back-to-normal now.

And according to all the privatised carefully rigged surveys, with carefully framed questions to elicit only positive responses, less than 5% of the public (all thought to be cranks) admit to being unhappy with the government’s performance, and will be farmed out to some private entity shortly for psychological fixing for a mere few millions more of tax-payer’s money.