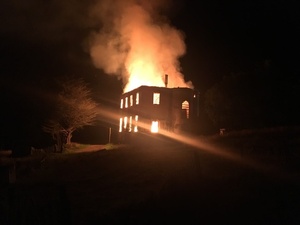 From top: Vernon Mount House in Cork was destroyed by fire on July 25, 2016; Dan Boyle

It is nothing like the same context, importance or cultural significance. As Notre Dame was burning I thought of the many of the abandoned husks we have in Ireland.

Stretching as far as back to Norman keeps, and more recently in history to the score of torched stately homes, ruins of buildings seem to have become an entrenched part of the Irish landscape.

In Cork we have a number of recent examples. The fires at Our Lady’s Hospital in 2017 and a year previously at Vernon Mount, have deprived the region of two buildings of significance each poised on either side of the city, defining its outer limits.

Both have since been left discarded. Those who should be thinking about what to do being frightened about the cost of restoration, or lacking any viable plan as to how the renovated buildings could be used.

I particularly pine for Vernon Mount, a huge part of the landscape of my growing up.

The extent of its deterioration, within a very short time span, has been very much a thing of pity. It has been reduced to little more than frontage. In reality it needs to rebuilt from scratch.

Many would argue what would be the point. Many would say that there are far more important uses for public money, especially at a time of housing crisis.

And yet I believe a case can be made. There is an onus to protect elements of architectural heritage from various eras of an area’s history. In Ireland we have been too quick, too often, to demolish rather than add to.

Cork’s Georgian architectural history has virtually disappeared. Restoring Vernon Mount would be a continuing exemplar of what Cork once looked like.

Even if this argument were to persuade there is a still a question as to what a restored building could be used for. Again, I believe it is only imagination that prevents an answer to this question. It could be a community facility, a cultural centre or an innovative social housing project.

Vernon Mount has a story to tell. Cork’s Hellfire Club, its most renowned resident the infamous Sir Henry Browne Hayes, abducted a wealthy heiress here to inveigle her into an illegal marriage as cunning plan to deal with his mounting debts.

Other voices will say let what was be, but I have been here before. One of the more disappointing campaigns I had been involved with, when previously a city councillor, was to argue an alternative use for the former Greenmount industrial school.

An austere, imposing building, it carried with it a tragic history. I had succeeded in persuading the Presentation Brothers (then managers of the school) to mark the names of young men who had died at the school having been sent there, but who had been buried in an unmarked grave.

The order subsequently sold the building to a private developer. What followed was an all too familiar story of loose security, encouraged anti social activity, and when that was not enough, the strategic removal of the roof. This was all part of a wearing down process to encourage a community’s disinterest under which potential would never defeat the folk memory of history.

Another lost building changes the history of nothing. The ruins of many past structures do little to enhance the landscape. What is sorely lacking is a policy on what we should do.

Some ruins need removing. Some buildings need restoring, repurposing. What we need are criteria that help us define why and how.