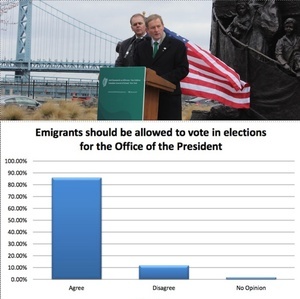 From top: Enda Kenny promised a referendum to extend the franchise to vote in Presidential elections to the Irish diaspora in Philadelphia, USA, March 2017; The results of a global poll conducted by the Constitutional Convention and contained in its fifth interim report of 2013; Derek Mooney

If last week’s reports are right – and the Taoiseach has said that they are – then all of us will be heading back to our local polling stations sometime in October or November.

No, it won’t be to elect new Dáil and a new government… well, it does yet not seem that will be the reason, but who knows what may change over Summer?

For now, it looks like Irish citizens across all 40 Dáil constituencies are about to be invited to vote in yet another referendum. This one on extending voting rights in future presidential elections.

[I mention the 40 Dáil constituencies, as voters in four of them will likely be voting in by-elections occasioned by the election to the European Parliament of TDs: Billy Kelleher, Frances Fitzgerald, Clare Daly and Mick Wallace.

Confirming the reports in the Dáil last week the Taoiseach said that Cabinet has signed off on legislation to “extend voting rights for presidential elections to Irish citizens in Northern Ireland and around the world” and that he plans to have it debated before the Dáil rises for its summer recess [planned for July 11].

He also said that the government has produced a 100-page, detailed paper on how it is going to work. I sincerely hope it has, but why are we still waiting to see it?

It is not as if this idea has not been sitting in the government’s inbox for years. Over five and a half, according to my calculations.

Back in November 2013 the then Constitutional Convention (the forerunner of the Citizens’ Assembly) produced its fifth report which recommended that:

It is a good report that strongly makes the case for both reforms. At just over 60 pages in length, it is doubtless the source text for much of the material in the 100-page document that the Taoiseach mentioned, so why has taken almost six years to come up with the other 35 plus pages?

The Constitutional Convention’s Fifth Report deserved a lot more attention than it received. It examined the issues and difficulties associated with granting extended voting rights.  It puts many of the concerns that some have raised in recent days to rest.

The section by Dr John Garry of QUB on the impact that Northern Irish voters might have on an election outcome is especially useful in scotching some of the wilder claims. Claims that my good friend. Dr David McCann, succinctly addresses in this short twitter thread.

So impressed and beguiled was the last government by the Convention’s Fifth Report that it delayed discussing it in the Dáil for two full years. Remember, this is a report from a body that the Dáil itself established in July 2012 to explore these questions and make recommendations.

Even after two years waiting the government could only allocate two measly hours on a dreary Thursday afternoon in January, just three weeks before the 31st Dáil expired, to discussing issues of major constitutional reform that the Convention had spent months examining.

The January 14, 2016 Dáil debate discussed the fifth report and four others. If you could call it a discussion. The most senior government participant in the proceedings was the subject of my last Broadsheet broadside: Minister of State, Paul Kehoe, T.D.

The report was then marked for prompt inaction as Fine Gael got ready for its 2016 electoral drubbing.

The fifth report was dispatched back into a drawer until An Taoiseach Enda Kenny found himself in need of something exciting and colourful to announce while in the US preparing for his first and last St Patrick’s Day meeting with The Donald in March 2017.

And so, standing in Philadelphia, just weeks before he was to stand down as Taoiseach and Fine Gael leader, Enda Kenny announced that there would be a…. drum roll please… referendum on extending voting rights in future presidential elections… I wrote about it here at the time.

Back then I said that I was:

“…far from thrilled or enthused by what I have heard from the Taoiseach and his Ministers over the past few hours. Surely such a major constitutional change should be accompanied by detailed research and argument, not followed along by broad range of options for consideration to be published a month or so later.”

Two years on from Enda Kenny’s 2017 announcement, which itself was three and a half years on from the Constitutional Convention’s Fifth Report and it is plain to see that the government has still not yet fully internalised what this proposal will involve.

Once again, we see a big announcement with no supporting documentation.

This cannot be the way we do serious constitutional reform.

The proposal itself has a great deal of merit, even though it seems odd to focus on giving presidential votes to citizens living abroad before having a universal franchise for the Seanad.

That said, why is it that these proposals are only touted when a government in heading into its final months?

This is a slow motion re-run of the total hash the government made of last month’s plebiscites on Directly Elected Mayors in Cork and Waterford – something I warned about in this Broadsheet piece.

As I have said here before, all this smack of being what you do when you want to look like you are reforming something, rather than actually reforming it. I would call it style over substance but calling it style is to attribute to it a solidity it simply does not possess.

The electoral and political reform we need – and need now – is to establish a fully independent, stand alone, electoral commission with teeth.

By that I mean doing more than just moving a handful of APs and HEOs from the franchise unit in the Customs House to some glass fronted open plan office in D4.

An election commission has been long promised, but it only became a vaguely real prospect when the Government announced, last December, that it would be conducting a three-month public consultation on how it might work.

In fact, the report of that public consultation process is due around now but, given this government’s record for letting such matters slip, I’ll not hold my breath.