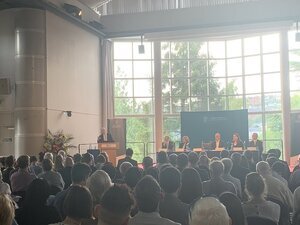 I wasn’t going to go but decided to anyway. It was billed as a ‘town hall’ meeting but was anything but.

An opportunity for the government to present its green credentials, to sell their plan.

And it was going well, at first. Richard Bruton and Simon Coveney are people I get on well with. I admire their political skills. They were even sounding plausible until the inconsistencies they were juggling began to be exposed.

The first glaring error was the attempt to stage manage the meeting from the offset. Attendance at the meeting was by invitation. Many who should have been invited weren’t, some by oversight, others for the sake of having a quieter night.

Most of those from the environmental sector were kept in the dark about the event happening, where it was going to happen, or what the purpose if it was.

The local media were told to leave once the set piece speeches were made.

On the stage with the Ministers were representatives of State agencies. There to amplify the government’s supposed wonderfulness, but never to critique it.

There to placate us were representatives of the Environmental Protection Agency, the Sustainable Energy Authority of Ireland, and because someone thought the organisation had some climate emergency credibility – Teagasc!

Within the hall were environmental activists who, long before this, should have been involved in this process since its inception.

All this before an argument was made. When asked how the government could be arguing for a National Development Plan, dripping with new roads projects, each one of which will add enormously to the country’s carbon load, could be compatible with a climate action plan, I was told it just could.

Direct denial was one thing. Making claims that weren’t and couldn’t be true another. We were told that the NDP prioritises public transport over new roads by a factor of two to one. It doesn’t.

The most depressing part of the evening was that more than half of the questions were from farmers engaging in special pleading, that they were already doing all they could be doing on climate change.

Repeated by these pleaders was the hoary, supposed fact that in Ireland we produce beef in a far more sustainable way than elsewhere in the World. As if that mattered in any way at all.

The comparison isn’t about the different methods or effects in raising cattle. It’s about the extent that greenhouses gases are being created by too many cattle being bred, wherever such cattle are being bred.

The fact that these questions were being asked in the way they were being asked, highlights the major difficulty Fine Gael faces when it comes to being seen as credible in relation to the climate emergency.

Since coming into government in 2011, Fine Gael has overseen an expontential increase in Irish emissions. Fuelled by policies that are antithetical to reducing carbon risk.

Having failed to achieved credibility to date, it’s hard to see how Fine Gael can do so now, especially when to do so would mean to challenge the core of its political support.

That I can’t see happening.

6 thoughts on “Dan Boyle: You Spin Me Right Round, Baby, Right Round”