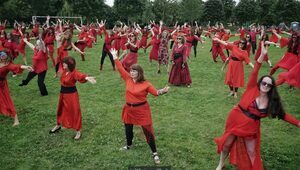 They do safe thinking. They do thinking as it has always been done, and then they vote for politicians who do the same and then you end up with an imagined future world of private electric cars, a slight tweak on the present scenario because most people don’t do radical thinking.

Some argue that it was radical thinkers; artists, creatives, who created all the goodies that the non-radical thinkers now squabble about. I believe this.

And for every invention created by a radical thinker, you can be certain that a majority laughed and scorned and called the inventor “mad”. That’s the bulk of humanity, now swanning around empowered by the inventions of “mad” radical thinkers.

I believe it was Edward de Bono who said that companies have two states: the initial creative state that establishes the company, and then the maintenance state that keeps the company going.

The people who create and establish the company generally move on and create something else, because that’s what they do; they make things.

Capitalism is a kind of company. It served everyone at one stage but has now become stagnant because it is run as it was always run, by the functionaries, despite the fact that it is in dire need of radical thinking to adapt to change.

But it can’t do that.

The great machine lumbers on, oblivious to the destruction it is causing to people and to the environment. It is run by people who don’t do radical thinking and so they can’t see the problem.

By chance I caught a video of hundreds of people dancing to Kate Bush’s Wuthering Heights. A celebration, a commemoration of the artistry of the record and the dance that went with it.

This is done all over the world. This one was being done in Fairview Park in Dublin.

But the interviewer seemed intent on mining for Kate Bush’s oddity as a person. She was a “bit special”, he says at one point, a term that is often used to kindly remark on a person’s perceived mental deficiencies.

Later he observes “She’s kind of kooky though, isn’t she?” As if this were a problem to be shied away from, to be managed. Something questionable.

This is a wonderful example of a righteous square attempting to label a creative mind, a radical thinker, as odd and mad and ultimately pointless.

And the square’s righteousness is validated by faith in the economy and the great capitalist machine run by squares with eyes fixed on the bottom line who believe that radical thinking is “mad”.

Though everyone agrees that radical thinking is needed to tackle climate change.

Radical thinking is a wasted resource, its value unrecognized by the safe thinkers that run the world and who, by their lack of imagination and vision, risk running the whole planet into the ground.

That’s your future, my future and everyone’s future. End of story, game over.

Simply because some safe thinkers in power are blocking the human ingenuity required to modify the great machine of capitalism, designed by radical thinkers, which has served us so well but which now needs modification, because the damn thing is running wild, driven by people who can’t see the damage in their wake.

The ethos of the normalton also skews the definition of work into a kind of hard graft slavery, achieving little or no end – except perhaps a perceived statistical improvement to the abstract “economy” – while thinking and creativity, the very activities at the root of human progress, are generally regarded as being out of touch with reality.

Though everyone is agreed that radical thinking is needed to tackle climate change.

That’s the difference between the person dancing in Fairview Park to Kate Bush’s Wuthering Heights, and the interviewer trying to tarnish the artist as a freak. The dancers get it, though they admit they can’t do it.

The interviewer, on the other hand, seems to believe that there is nothing to get, and seems determined to get the dancers to admit to the perceived “nothing” of it all. To prove that the artist and the artist’s followers are all equally “mad”.

Though everyone is generally agreed that radical thinking is needed to tackle climate change.

12 thoughts on “Eamonn Kelly: You Can’t Be Too Radical”