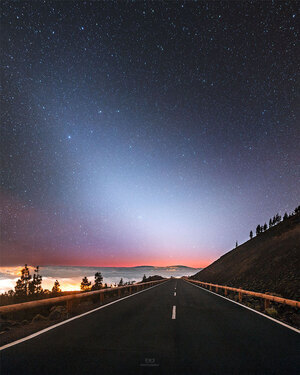 What’s that eerie glow down the highway? A still from ‘Stranger Things’? No, it’s dust orbiting the sun. To wit:

At certain times of the year, a band of sun-reflecting dust from the inner Solar System appears prominently just after sunset — or just before sunrise — and is called zodiacal light. Although the origin of this dust is still being researched, a leading hypothesis holds that zodiacal dust originates mostly from faint Jupiter-family comets and slowly spirals into the Sun. Recent analysis of dust emitted by Comet 67P, visited by ESA’s roboticRosetta spacecraft, bolster this hypothesis. Pictured when climbing a road up to Teide National Park in the Canary Islands of Spain, a bright triangle of zodiacal light appeared in the distance soon after sunset. Captured on June 21, the scene includes bright Regulus, alpha star of Leo, standing above center toward the left. The Beehive Star Cluster (M44) can be spotted below center, closer to the horizon and also immersed in the zodiacal glow.