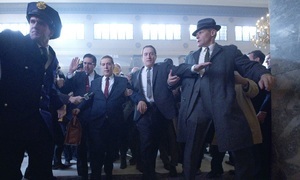 1. Here it is people, Martin Scorsese‘s mega-budget return to the crime genre in which he reunites with his muses Robert de Niro and Joe Pesci, along with Al Pacino and a sprawling supporting cast that includes Steven Graham, Harvey Keitel and Anna Paquin. It is Scorsese and De Niro’s ninth film together, and their first since Casino (1995)

2. The Irishman is adapted from Charles Brandt’s non-fiction book I Heard You Paint Houses exploring the notorious disappearance of union leader and mob boss Jimmy Hoffa (here played, as you can see, by Pacino). Hoffa’s life and times were previously depicted in Danny de Vito’s Hoffa (1992), in which the title role was played by Jack Nicholson.

3. Anyway, The Irishman. Lots of Marty’s trademarks are present and correct in this trailer, and the man’s mere association with the genre he helped shape is a selling point in itself. Documentaries aside, he’s got two broad modes that he has bounced back and forth between over the years: the spiritual/personal Scorsese last seen in Silence (2016) and the energetic and confrontational Scorsese last seen in The Wolf of Wall Street (2013), which a lot of people seem to dislike but for me is among his best. I like to hope that The Irishman will find itself somewhere in between the two. Scorsese is a master filmmaker; there’s little doubt he will find a way to work his own life experience into the thread. After all, he, De Niro and Pesci (and Keitel) were young men when they first began working together, now they’re wrinkly old codgers, de-aging CGI or no.

4. How great it is to see Robert de Niro back where he belongs. 20 years of dreadful comedies suggest he got bored of acting somewhere in the late 90s (1998’s Ronin, for me was his last confirmed sighting), so to see him understating it as a double-hard bastard is a pleasure. Maybe Dirty Grandpa (2016) was the last straw for Scorsese who simply had to step in and make things right.

5. Meanwhile, Joe Pesci seems to have been retired since 2010; he appears to have lost none of his ability to terrorise the screen just by sitting there saying nothing.

6. The only thing that would give me pause for this movie is the aforementioned use of CGI to de-age the actors as the story plays out over decades. This is apparently the reason for the rumoured €200m budget, another massive gamble for Netflix. That last shot, where de Niro says “whatever you need me to do”, if you play it back a couple of times it starts to look a little hinky. For one thing, the hand holding the phone is clearly not de Niro’s hand, it’s superimposed onto the screen. We’ll have to wait and see.

7. As for Netflix, I’ve talked here lots of times before about the meaning of these A-list actors and directors going straight to the small screen. The studios just are not willing to spend that kind of money on a non-sequel, non-franchise movie, no matter who is in front of or behind the camera. At the same time, you’ve got to admire Scorsese for leaning into the technology (streaming, that is, but heavy CGI as well to be fair). While the likes of Spielberg and Nolan are churlishly gate-keeping, including getting Cannes and Academy rules changed to make it as difficult as possible for Netflix to win any awards, Marty is acknowledging (A) the opportunities it presents and (B) the fact that it is here to stay. As, it seems, is he.