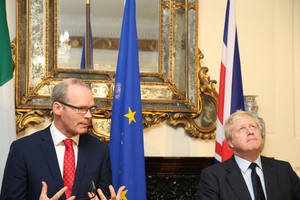 From top: Boris Johnson, then UK Foreign Secretary and Simon Coveney at the Department of Foreign Affairs in 2017; Bryan Wall

With the ascension of Boris Johnson to the prime minister’s office in the UK the prospect of a disastrous Brexit draws ever closers. Johnson is the epitome of the arrogance and lack of concern shown by many of the conservative Brexiters. It has to happen no matter the consequences.

Part of the reason for this is the incessant need for the powerful to demonstrate just how powerful they are. Johnson is no different.

Like our own Leo Varadkar, he’s not a bumbling idiot with a consistent case of foot in mouth syndrome. His worldview is tempered by privilege and the idea, inculcated from an early age, that the Britain of old was the peak of western civilisation.

Everything Johnson says and does is filtered through this particularistic and outdated mode of thought. It’s a signal to others, both the elite and the wider population of Brexiters, that the dream of Britannia can be realised once again. And all it takes is to cut ties with the EU no matter the outcome.

In any functioning society the idea of a hard Brexit should cause widespread panic among everyone from the heads of government down to the local shopkeepers. Instead, it’s seen as the top priority by a large portion of the population.

Johnson has played a large role in fomenting this view of Brexit as one of the UK regaining its former independence and prestige. And he’s been wildly successful at it too. Johnson is no idiot.

Given this, he likely believes he has the upper hand. Varadkar and Ireland have been largely dependent on the backing of the EU in its support of the Irish position regarding Brexit.

Everyone knows this, including Johnson. And everyone also knows that the EU has been more than willing to sacrifice Ireland on the altar of the perceived greater good in the past.

This is a vulnerability that it seems not many are willing to talk about. Considering Johnson’s apparent madman international relations policy, it’s a sizeable blind spot.

Thus far the EU has stood firm. But the premise of the madman theory is that Johnson is irrational and cannot be reasoned with. And with his insistence that a Brexit is coming one way or another we can see the theory in action.

Of course, this is a calculated move on Johnson’s part. But it should make people wary of placing all of our bets on EU support.

Plus, regardless of who blinks first, or who doesn’t, the effects on Ireland will be large. One report found that no matter what shape Brexit takes the economy will be negatively affected.

The Economic and Social Research Institute (ESRI) looked at what effect three different kinds of Brexit would have on Ireland: A “Deal scenario”, a “No-Deal” situation, and finally a “Disorderly No-Deal” Brexit.

the level of real output in the Irish economy would be 2.6 per cent, 4.8 per cent and 5.0 per cent lower in the Deal, No-Deal and Disorderly No-Deal scenarios, respectively, compared to a situation where the UK stays in the EU.

Unemployment will rise and tax revenues fall. For Ireland alone, a lot hangs in the balance. For Johnson and friends all they see is the possibility of a newly independent UK. Any side effects such as shortages of food and medicines are worth it for the chance to stick it to the Irish and reinvigorate Britannia.

Another side effect of Brexit and the rhetoric surrounding it has been its utilisation by the far right and extreme nationalists. For them Brexit is a way to stop what they see as the erasure of British culture and values.

Like Johnson, they are blinkered but for very different reasons. Johnson wants an independent Britain. The far right want an end to immigration and to anyone or anything non-white. And in both cases the wider consequences don’t matter. To not want Brexit is to be a traitor.

The situation is not pretty. No matter what happens, if somehow Brexit is averted or postponed, or if Johnson ploughs ahead with a hard Brexit, the division and hatred that’s been already whipped up will reach even greater heights.

As things currently stand hate crimes have increased. Now imagine if the far right and those who pander to them don’t get their way. This is not to be scoffed at or seen as scaremongering.

For now though, the entire situation lies in the hands of Johnson and those closest to him. If his madman tactics are played out to the full, then we can indeed expect a hard Brexit and all the negative consequences that will come with it.

But maybe it’s all about posturing. Remember, Johnson is no fool. Maybe he’ll finally be convinced that there’s a way other than a hard Brexit.

But if the madman theory holds true don’t expect any course correction, if any, until the last second.

Bryan Wall: Especially For You

Bryan Wall: Show Me The Money