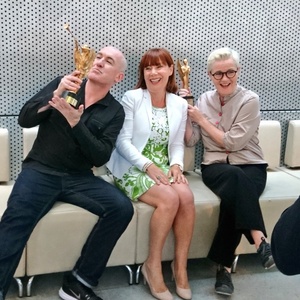 When the Republic of Ireland football team arrived back in Dublin airport in the summer of 1990 to be greeted by up to a million delirious fans for their world cup exploits there was a moment when a podium and microphone were up for grabs.

The contenders for the prize of addressing the crowd and basking in the glory were Jack Charlton and Charles Haughey.

Charlton placed a shoulder in front of Haughey and easily left him for dead, as he had done to opponents throughout his footballing career. Charlton took the plaudits.

Contrast this with Josepha Madigan beaming comfortably between Pat Kinevane and Gina Moxley, basking in the glory of Moxley and Kinevane’s deserved separate Edinburgh Fringe wins.

Even the investment of €680,200 from Culture Ireland for the promotion of Irish arts globally, conveniently touted by the minster at the celebration, a fund to aid artist travel, could easily be regarded by a stretching cynic with a darkly humorous streak, as a fund privately designed to encourage the mass emigration of wacky creatives.

Political hierarchy is perhaps best defined by who stands closest to the public money, with circles of influence extending from the elected few, literally, out into the wider community, where queues of friendly association are formed in a bid to win best position for a piece of the pie.

But what if the elected official you have been grooming for a few years turns up implicated in a possible scam elsewhere? What do you do?

Do you throw out all that networking, all the angles and “chance” meetings, engineered to exchange smiles and first names as you jostle for position? Do you just throw all that away? No. You wait. You sit quiet and you watch and you wait.

Because these are hard times for the arts. In Dublin the arts are being systematically squeezed out of existence, a problem outlined in last Saturday’s Irish Times.

In the The National Campaign for the Arts (NCFA) pre-budget submission, published on July 16, at the height of the so-called swing-gate affair, the arts body went out of its way to congratulate Josepha Madigan on the tweak to welfare law that allows artists to spend the first year of unemployment trying to make their art economically viable.

After that, artists go onto employment activation, which only kicks in after a year anyway for everyone. Still, there is a concession there, that for a year artists may pursue their art rather than pursuing “real jobs”.

But there is no acknowledgment of the miserly-funded arts scene that artists are supposed to knock a living from; nor the fact that commerce has created a cultural wasteland devoid of venues and opportunity; nor the fact that it is widely recognized that art is not a business anyway and depends on subsidy.

Nor the fact that artists are being given a year to make their art a business or go get a “real” job, which amounts basically to a job in the service or hospitality sectors.

Instead the NCFA congratulates the minister on this “initiative”; one which is unlikely to ever really affect the well ensconced middle-class personages that make up the NCFA.

These are the administrator and managerial class of the arts, many who have created funded lifestyles from the activities of grassroots arts practitioners. It makes little difference to them if the infantry of their sector are herded into service jobs after the year’s grace to laughably attempt to make a business from art in this skewed, under-funded environment.

That’s all down there. Up top, the cream of the sector mix with the political and business classes and they are all essentially the same people from similar middle-class backgrounds.

In this kind of culture, criticism of these realties is written off as individual “bitterness”, as remarked upon recently by the playwright Lisa Tierney-Keogh, who got a break with the Abbey in the aftermath of the protests against the skewed representation of women playwrights on the Abbey stage. Note that the break only came after the ‘Me-Too’ outcry. An outcry by a movement, not by an individual.

But the reverse of this idea of criticism being bitterness, is that non-criticism can then become seen as co-operative, even in a situation that is endlessly producing socially unjust outcomes. Non-criticism becomes smiling acceptance and, on the face of it, everything appears to be just fine.

Ireland has a track record in political silence. In Peter Lennon’s excellent social documentary, “The Rocky Road to Dublin”, recently restored by Sé Merry Doyle and the Irish Film Board, the writer Sean O’Faolain comments on this attribute of Irish culture when he describes the Ireland that emerged from revolution as a society…

“…which was without moral courage, constantly observing a self-interested silence, never speaking in moments of crisis… a society in which there are blatant inequalities…”

When you hear that from 1967 and compare it to today’s cultural landscape it makes you wonder have we changed as much as we often like to believe we have.

An idea that is further reinforced when you learn that this Cannes award-winning film and it’s critique of Irish culture has never been shown on Irish television.

This came to mind when watching Margaretta D’Arcy and Finn Arden’s documentary about wheelchair access, “Welcome to our World”, made to highlight the difficulties the playwright John Arden was facing in later life when confined to a wheelchair; problems which are faced everyday by wheelchair users.

And the defining element of the problems they encounter is largely due to thoughtlessness or a “sure it’ll do” attitude.

But, and here’s the thing, it is assumed that you are “happy enough” if you just endure those thoughtless difficulties in silence. But if you criticise, it is not assumed that your criticisms are valid, but rather that you are, personally, “difficult”.

The result is that the thoughtlessness that is parent to so many Irish social injustices is never unmasked and nothing ever changes. Because to complain is to be “bitter”. And only a few stronger individuals ever complain.

Few enough to be easily isolated and labelled “difficult” or “a bit of a character”. In this way the silence is preserved along with the political inequities such silence encourages and cultivates.

32 thoughts on “Eamonn Kelly: What’s Wrong With This Picture?”