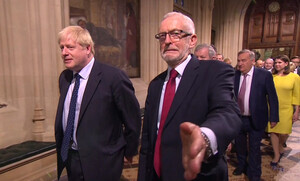 Having painfully discovered that asking a binary question does not, of itself, extricate a country from forty plus years of international treaty commitments, our friends across the water (and up North) are now facing a fourth general election in nine years.

In a bitterly divided country, reliance will now be put on one of least democratic voting systems in the World, where victory can be claimed with only one third of the vote.

The value of the votes that get cast in an UK election are but one thing. How votes are informed is a far more important aspect altogether.

Britain possesses one of the most pernicious ‘free’ media in the democratic World, one that isn’t countered in the slightest by public broadcasters there.

It is a media goverened almost entirely by proprietoral interests. No exaggeration is ignored in pursuit of these interests.

A bought and sold for media has managed to convince many in Britain that they are the victims of others, the EU and assorted other foreigners, rather than the destiny makers of those elite and established British privilege holders whose look over there politics has helped them hold sway for far too long.

More than likely this established Brexit narrative will take hold in this election. Boris Johnson and the Tories seem on course to achieve a majority in the next House of Commons.

Whether this majority will be used to quickly process the currently agreed deal with the European Union, or instead pull another rug then steam towards a No Deal Brexit designed to create the dream of Singapore on the Thames, we will yet find out.

The Tory majority, if it comes, may not be that substantial. The party will lose seats in the south of England to the Liberal Democrats. In Scotland to the Scottish Nationalists.

The key to the election will be in how many seats the Tories can win from Labour in Leave voting constituencies in the English Midlands, or in the North of England. A North of England that previously was forbidden territory for the Tories.

Once again Jeremy Corbyn will be the key figure in the election. He is neither the Maoist terror figure he is often portrayed by the Murdoch led press, or the hapless fool is sometimes seen as, at times even by his own party colleagues.

He has though been the author of his own difficulties. His ambivalence, in leading a Europhile party against his long standing opposition to the EU project, was one of the biggest contributory factor in bringing about a Brexit yes vote in 2016.

If a policy led narrative takes hold in this election, then Corbyn could yet make the recovery he made in 2017.

But he will be up against a far better opponent than Theresa May. Johnson maybe incorrigible and more corrupt, but he is a substantially better campaigner.

Victory for Corbyn in this campaign would be to stop a Johnson majority. In this he could be helped by Nigel Farage and the Brexit Party, whose search for a perfect Brexit may siphon off key Tory votes.

Up North a Remain alliance could see DUP come back with less MPs. Wouldn’t that be nice?

15 thoughts on “Dan Boyle: Once More Into The Bleach”