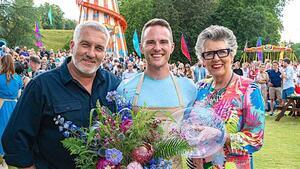 Here we are, finally final, where the 2019 Season’s Baker’s dozen shifted down to three.

My tent pole since Cake week, Steph Blackwell’s final can be summed up by the state of her Technical – the girl just completely slumped like that congealed smelly cheesy mess; except her fringe.

If anyone knows how her hair managed to stay so imposingly straight and perfect, please do let me know.  I only have to boil a kettle to have my own hair turn to candy floss.

The most awkward baker to watch this year, Alice, made the final even more uncomfortable with her own personal drama running alongside her, the only support I could summon was an impatient Grow Up ffs.

And the one I couldn’t get behind all season, like I barely had a decent word to say about the lad, David Atherton is the 2019 Bake Off champion. But I’m happy to reintroduce a quote from Jimbo here last Sunday; winners are always grinners

I’ll run with the good bits first, mainly the integrity of the Judging.

I have never been shy about vouching for the Hollywood’s view of the world, but I can’t provide any better proof than this year’s final outcome.  And in fairness Alice even out of all her own anxiety about her Mammy and Daddy, summed it all up best when she said David just blew them away.

He wiped the floor with his fellow finalists over every step of that Final Weekend, even if his Signature was considered too boozy, it was up against two other cakes that didn’t set off any fireworks either.

David is the first finalist not to have a Star Baker to stand on, and he cleaned up.  Even his apron was immaculate.

Neither Paul nor Prue flinched in favour of the previous weeks or demonstrated any favouritism or sentimentality.

This is why I know Bake Off will always be safe, despite the many criticisms of this year’s season in the Tent, and I have a few myself, but for sure and for absolute certainty, we can always trust the Judges to remain free from bias and judge only what is put in front of them.

Before I introduce some of my own moans about Season 10, I want to mention a few highlights, particularly from the final.

I must stand up for the best chocolate feature cake anyone can bake, the BFG.

Who the hell is anyone, and even Paul Hollywood is at it, think they are to sneer at the Black Forest Gateau like it’s a bad school photo?

I bet those same people don’t look down their noses at Charlie’s Angels; (and just for my pal Neil off the Telly) what does Star Wars remind ye of?  Strikes, Corporal Punishment in Schools, The Pope’s ’79 visit; my ass it does.

Looking down your nose at the BFG is a snide dig at those of us that don’t need high-brow foodies to tell us what we should like’ and besides, the BFG’s inventor lived well into his 90’s so there must be some goodness in it.

I am thrilled that I can pin up here Steph’s own signiture BFG.  It’s a fabulous recipe and it’s even set to easy.

Also, don’t go mad running around and spending money on Kirsch, just drop into your nearest Polish Supermarket and you’ll have your pick from plenty cherry liqueurs for under twenty quid; enough for twenty BFGs.

I am also thrilled this year’s final gives me another great home bake standard recipe to pin up onto Bake’Sheet; Lemon Pound (kinda) Cake.

This was the main sponge in David’s Picnic Basket Showstopper the other night.  Ok – I don’t know what lemon spice is either, but you have an immediate work around.  I can’t recommend a better home bake loaf cake standard, and I’m kinda glad it came from the Bake Off final and from the winner I had no time for all the way through.

So, the season, overall.  You know I hate to say it, but I think it could have done with more scrappy ah shur’ its only cake Selasi and Norman style bakers.

There were far too many distractions this year, between Henry’s Ties, the silly skits from Noel and Sandi, and all the tears, week in week out bloody tears; too much frump and feck all craic.

In my own opinion, I think the producers interfered a bit too much with the atmosphere, especially placing more scenes of the Hollywood looming and prowling silently around the tent at the bakers in the final cuts, and the miserable level of the Handshakes (four in total btw) we got to cheer about.

I also think the age profile, while no demonstration of skill or ability, didn’t help, it is after all light entertainment even if its a form of reality telly, it’s still telly.

There were no carefree happy go lucky give it a lash jacks, the young ones this year were all too serious, high achieving and you know what?

Humdrum pretty much sums up the majority of the bakers this year.

But to repeat what I said earlier, I think Bake Off while still in the hands of Hollywood and Prue is safe; but it does need a shake up in the format; I personally would love to see guest Judges for a segment like the technical element; specialists like a chocolatier or a regional speciality we may not be familiar with; Russian Cream Crackers or something.

Maybe it’s time to reintroduce the History Segment, I particularly loved being introduced to the Red Cross Doughnut Dollies in WW2, especially when I followed it up myself and learned that many were Irish girls, it actually joined the long finger of script projects.

I wouldn’t touch Noel and Sandi either, but I would reduce the skittish slapstick two handers; there are totally unnecessary and cut into the time available to the producers that were at the expense of Sandi’s natural gift for elegant sartorial continuity joiners that we want to see, and for Noel’s comfy shoulder to cry on.

In the GAA we say there’s always next year, so until then, or maybe not, I will leave ye with what also came attached to what Jimbo said above Who care’s if they’re insufferable …..