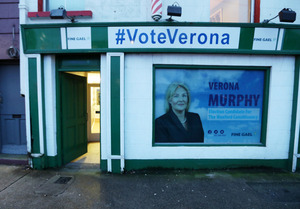 The nod and wink of Irish politics is being replaced by the ‘you know what I mean’ provocative phrase. The trigger word, the dog whistle, the epithets of hate, have gained currency in our cheapened political discourse.

Such phrases are more often than not thought through in advance, and rarely are slips of the tongue.

Calculations are made. If some liberal types get offended, a forgiveness strategy might need to be put in place.

Reaction should be swift but doesn’t necessarily have to be sincere. It is a careful calibration against the character doubt that may be created.

For some who have been offended, the thought of someone who has proffered a near immediate apology, is thought to diminish the seriousness of the original, offensive, comment.

Thus two sides of an audience are faced at once.

On the edge comments we wrongly analyse as stand alone content. Too often we ignore what is being implied.

Recent comments by Fine Gael by election candidate, Verona Murphy, on immigration and homelessness came across as crass and cruel. On the surface they certainly were. However the veiled implications seem quite in keeping with current, prevailing, Fine Gael philosophy.

The gist of this philosophy is that the sole determinant of personal wealth is the ability to work hard and be rewarded for effort.

The corollary of this philosophy is those without wealth only have their lack of effort to blame for that.

For hard work also read the market. This the regulator that most strongly rewards those who work hardest.

With the market as king, society stops being a shared experience becoming instead a battleground of competing interests.

In the World of modern day Fine Gael, the worst of these competing interests are those unwilling to work their hardest. They become a drain on those who do.

They are best helped by having them confront the market, whether that be education, employment, or more particularly housing.

Those less mercantile within Fine Gael would point to the party’s Just Society policy document as proof of the party’s sensitive side. Except this would be to exaggerate the place of Just Society in the mythology of Fine Gael.

Adopted as the party’s 1965 election platform it was quickly jettisoned by Liam Cosgrave, who was later to describe the authors of the Just Society document as ‘mongrel foxes’.

Only under the leadership of Garret FitzGerald could Just Society be seen as representing the ethos of Fine Gael.

In the UK, the Conservative Party equivalent would have been One Nation Tories. Largely paternalistic in their approach to social issues, One Nation Tories like Just Society Fine Gael, do show that compassion once existed in right wing parties.

With the Brexit take over of the Conservative Party, One Nation Tories will soon become extinct, joining in an extinction rebellion with their Just Society Fine Gael colleagues.

Margaret Thatcher once famously stated that there was no such thing as society. With the non adherence, in any shape or form, of its once vaunted Just Society values, the current party of government in Ireland seems to now believe that we are just a society.

3 thoughts on “Dan Boyle: An Epitaph To Epithets”