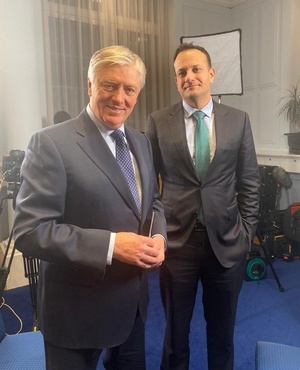 From top: Pat Kenny (left) and Taoiseach Leo Varadkar before their interview on Virgin media One last night; Eamonn Kelly

While it’s easy to smile at the soft interview Pat Kenny afforded Leo Varadkar last night, the nature of this type of exchange also has a serious side.

It might not be going too far to say it is a danger to democracy in that it  gave the wrongful impression that Fine Gael are a party of common-sense, surrounded by ideologically driven dervishes intent on subverting all the good work Leo Varadkar has supposedly been doing since assuming office.

Even Fianna Fáil was tarnished with the brush of ideologically-driven lunacy with the charge that they set in train the damage to the health service, for “ideological reasons” (unspecified), by cutting beds. Which may actually be true, but that really was a long time ago now.

When you consider that artists are given a year to make a business of their art in an unsympathetic and underfunded economy, before being flung onto the scrapheap of JobPath, the government who dreamt up that insult breezily fobs off ten years as still not enough time to fix a few fundamentals.

Pat Kenny fed Leo like a straight man feeding a comic. At one point the host posited the ludicrous idea that people on hospital trolleys may be piling up due to flu outbreaks. Surely he knows better.

But this allowed Leo to correct him and say that the problem is an all year-round problem, and gave him the opportunity to present himself in a concerned light and then blaming FF “ideology” for causing the problem in the first place, way back before Fine Gael ever got a sniff of power.

The interview was timed with pending election very firmly in mind, where the taoiseach hopes to get a “mandate” from the people, where he hopes to be elected for real rather than just be taoiseach by business arrangement.

He airily dismissed all this as of little concern, claiming to be far too busy governing and being concerned about the country as a whole to be worrying about elections, giving the impression that he’d do the job for nothing.

That’s how public-service minded he is.

Nevertheless, not everyone is happy with the fruits of his ongoing concern. The hospital consultants are still going on strike in the New Year because Simon Harris apparently tried to lay the blame for the failures of the health system on them. Now Leo is trying to park the blame on Fianna Fáil.

And Pat Kenny has absolutely nothing to say about any of this. He’s letting it all pass by like it’s some kind of arts parade to be smilingly admired.

If Fine Gael are anything, they are the party of heaping blame elsewhere. Even in this interview Varadkar shamelessly assured viewers that Maria Bailey and Verona Murphy would be flung under the bus, because, presumably, FG cannot tolerate dodgy insurance claims or the tarnishing of all of the people of one group with the same brush, as the taoiseach put it in the interview; meaning racism of course, but not alleged welfare cheating.

In reality, FG know full well, given the party’s socially destructive performance in government, that someone has to be nominated for the chop, and who better to nominate than a couple of gals.

Gender equality is all very fine, but when push comes to shove you can’t be flinging good blue-shirt lads under the bus.

Luckily there are two handy women in the ranks who’ll do just fine to feed the critics and bolster claims of FG being the party of probity, a line actually served up on a platter by Kenny during the interview.

The interview ended on a kind of poignant note that we might be losing Leo forever, after all the good work he has done, the telling of which was so helpfully facilitated by Pat Kenny during the course of one of the dullest political TV hours on record.

The ending attempted a reach-for-the-tissues moment on the grounds that we were now staring into the abyss of possibly losing the best man for the job of taoiseach; a victim of reckless ideologues on all sides whose onerous activities might yet deprive the country of his far-seeing visions. A man of substance we might never again see on our screens.

At some stage in the great yawning hour of the interview Varadkar laid claim to various successes, such as the equality referendum, which I’m sure will be news to many activists, and also to creating full employment, saying there are jobs now for those who want them, effortlessly tarnishing even without thinking; and there are many who feel that a poorly paid job in an impossibly over-priced and increasingly privatised economy, where the bosses and the landlords get all the breaks, is hardly a significant gain for the common man or woman.

The truth may be that in Varadkar’s Ireland hardly anyone gets a good night’s sleep, except maybe the taoiseach, who always looks well rested. He’s the pharaoh who gets to go to Heaven, and that’s reason enough for everyone else to slave away building the pyramid.

On the question of job creation he said that the reason FG were having difficulties in building social housing is because all the construction workers emigrated after the 2008 financial collapse.

But when claiming job creation successes he said that emigration of workers had stopped. Presumably the builders left in 2008 and never returned, and we have stopped making any new ones.

However, a serious social housing programme would be sure to entice the builders back and also encourage new apprenticeships, solving at least three problems in one fell swoop, delivering jobs and houses for all.

But there is a bigger game afoot and the short term price being paid for the projected long-term profits are the homeless and the destitute.

This little mystery of the missing builders in a sense proves the point that there is no serious social housing programme underway, despite Varadkar’s insistence that there are tens of thousands of houses being built.

He even said at one stage in the interview that 10,000 families had been housed in recent years (or was it recent months?) This sounded like either a fib or a slip of the tongue. It went by so fast I wondered had I heard right. But Pat Kenny moved on. Nothing to see here.

It’s not really up to me to get into an interrogation of the figures the taoiseach and his team decided to present to the public. It’s like untangling old rope. I’d spend the whole piece arguing stats. It was up to Pat Kenny to intervene, and he absolutely did not challenge Varadkar on this or anything else. At least he was consistent in that regard.

The real problem with this type of interview, and particularly the way Varadkar set out his stall, is that it simultaneously subverts both journalism and politics.

The manner in which it was done here, in depicting a country that is devoid of common-sense outside of Fine Gael, is kind of reckless really in the way in which it allowed Varadkar to set up, unchallenged, other potential scapegoats, to possibly be used later as proxies for Fine Gael failures.

I’m thinking specifically of Varadkar’s raising the spectre of a possible widespread politicised racism which, naturally enough, he condemns. But the impression given is that he only raised the issue to knock it down in order to display his humanist credentials.

These are fake gestures, particularly in light of the woeful Direct Provision conditions, the homelessness and decrepit health service he is presiding over; not to mention the underpaid workers and the over-the-top rents and insurance costs.

This idea of Varadkar as a sensible and concerned public servant becomes all the more absurd when you realise that the one expressing concern for tolerance and equality is one of the most flagrantly right-wing politicians the country has ever produced and, far from being some kind of progressive humanist, is actually something of a menace to the social good, who appears to have somehow achieved the normalisation of the sight of scores of people sleeping on the streets of the republic’s major cities.

The problem is that many people just aren’t up to untangling this type of thing any more. Everyone is flooded with information. How are you going to even begin to sieve out the misinformation? This is what journalism is supposed to be doing.

Pat Kenny appeared to not only subvert the founding principles of objective journalism, but also seemed to cultivate the idea that only one party in the land is commonsensical enough to wield power.

That the party in question is driven by a quite naked right-wing ideology of privatisation and accompanying destruction of social services, while casting aspersions all around about other supposedly suspect ideologues, makes this type of interview all the more dangerous.

Pic via Virgin Media One 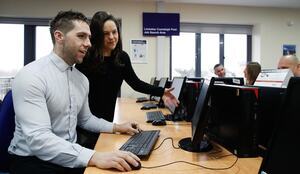 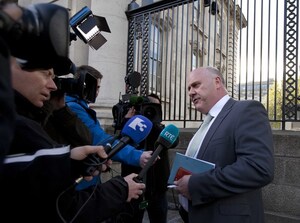 Eamonn Kelly: Nothing Is Compulsory 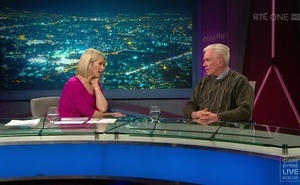 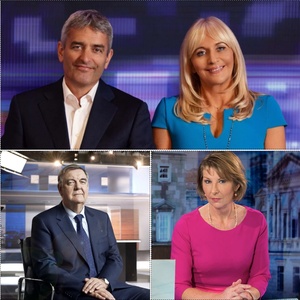 16 thoughts on “Eamonn Kelly: A Party Political Broadcast On Behalf Of Pat And Leo”